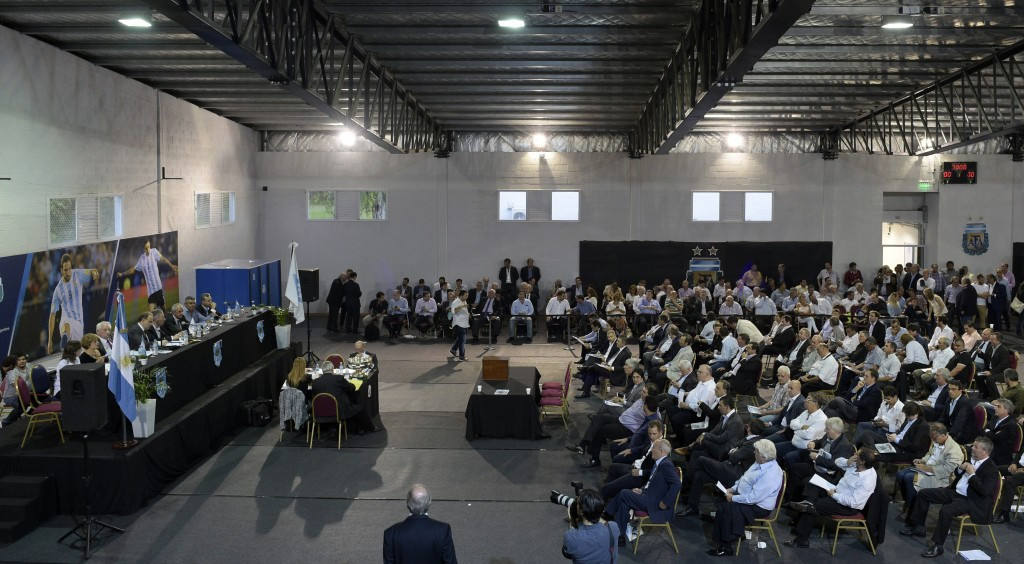 The Argentina Football Association’s (AFA) first Presidential election in 36 years ended in farcical circumstances after candidates Luis Segura and Marcelo Tinelli were tied at 38-all despite only 75 officials being able to vote.

The debacle forced the postponement of the election, held at the governing body’s General Assembly in Buenos Aires, and no new date has yet been set.

Interim President Segura took charge of the AFA following the death of Julio Grondona, the organisation’s President since 1979.

A joint-Presidency between both Segura and Tinelli, an entrepreneur and television personality, has since been suggested by the stand-in head of the AFA, who called the election “embarrassing and disconcerting”.

The development coincided with United States Department of Justice (DOJ) indicting 16 officials on corruption charges, two of whom were arrested ahead of the FIFA Executive Committee meeting in Zurich.

FIFA vice-presidents Alfredo Hawit of Honduras and Juan Angel Napout of Paraguay were both detained in the launch of another set of dramatic raids by Swiss authorities as part of an ongoing and widespread investigation.

Both have today been provisionally banned from all footballing activity as a result of the indictment for 90 days by the FIFA Ethics Committee.

Hawit was appointed interim President of Confederation of North, Central American and Caribbean Association Football following the arrest of predecessor Jeffrey Webb, who has pleaded guilty to racketeering conspiracy, three counts of wire fraud and three counts of money laundering.

Napout, who has opposed his extradition to the United States, is currently President of the South American Football Confederation (CONMEBOL), an organisation now at the heart of the FIFA scandal.

Marco Polo del Nero, President of the CFB, who only resigned from FIFA's ruling Executive Committee last month, has also been named.

The indictments have left CONMEBOL in dire straits, with third vice president Wilmar Valdez the next in line to take over as interim President following Napout’s ban.

“CONMEBOL is in a very urgent and complex situation,” Valdez, President of the Uruguayan Football Association, said.

“We have to keep calm and let the hours and days pass so we can resolve these issues."

Discussions on the future of the organisation are due to be held at CONMEBOL’s headquarters in Asuncion, Paraguay, in the next few days.

Uruguay's Sebastian Bauza is the only head of a South American football governing body not to have been indicted by the DOJ.