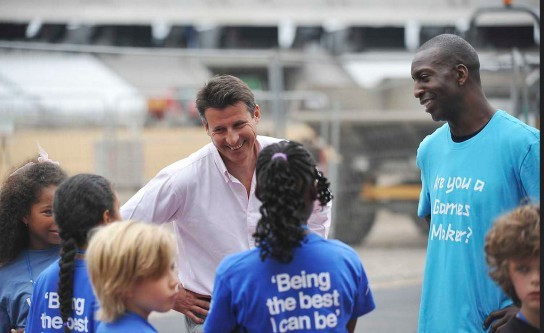 Athletics is currently reeling from a series of scandals, including allegations of state-supported doping in Russia, leading to the country being suspended by the IAAF.

“Seb Coe certainly has his work cut out for him, not just with doping issues but with credibility and restoring credibility to the sport," Johnson, currently in Dubai where he is attending the HSBC World Sevens Series in his new role of mentoring the United States rugby team, said today.

"It is a critical moment for the sport and Seb will have to lead by example, also in implementing policies that will restore credibility back in the sport.

“Credibility has to be restored, whether it can or not we will have to see.

"But that is important: it has to be priority, not only with media, but also with fans and athletes, credibility has to be restored – that has to be the first priority,”

Johnson, winner of the Olympic 200 and 400 metres at Atlanta 1996, is earmarked for a leading role in the new Values Commission Coe is planning to launch to help support and guide athletes, particularly teenagers, when confronted with dangers such as illegal betting and nationality or age manipulation, as well as doping.

“Athletics, I believe, has done a very good job of having a zero-tolerance policy for doping," the American sprinter, who holds the world record for 400m, said.

"The issue is, though, when you move from the conversation being less about who may or may not be doping to whether the organisation entrusted with keeping the sport clean and policing the sport, whether or not they are complicit in covering up tests and protecting athletes and there’s corruption and bribery allegations, that’s a whole different ballgame.”

“What would happen if Seb is not the IAAF President?" Cram said at a conference he was speaking at in Singapore today.

"Who else could do it?

"Seb has got to be allowed the time to get athletics right.

"It is a huge opportunity to make a real impact, to do what he has done in the past, too - to be a real leader.”

Johnson, though, admitted that stamping out doping in athletics totally is not achievable.

“I don’t think anyone in the world thinks we’re going to get down to zero-doping," he said.

“Are we ever going to get to a point where no one cheats on anything? I think that’s unrealistic."

Related stories
December 2015: Athletics is at "the crossroads" Coe tells British Parliament as defends ability to lead IAAF
November 2015: IAAF accused of trying to "muddy the waters" by anti-doping experts following defence of testing regime
November 2015: IAAF claim they are a "pioneer" in fight against blood doping as they clear Radcliffe of doing anything wrong
November 2015: Coe resigns Nike role to avoid claims of conflict of interest with position as IAAF President
July 2015: Michael Johnson to play leading role in new Values Commission if Coe elected IAAF President