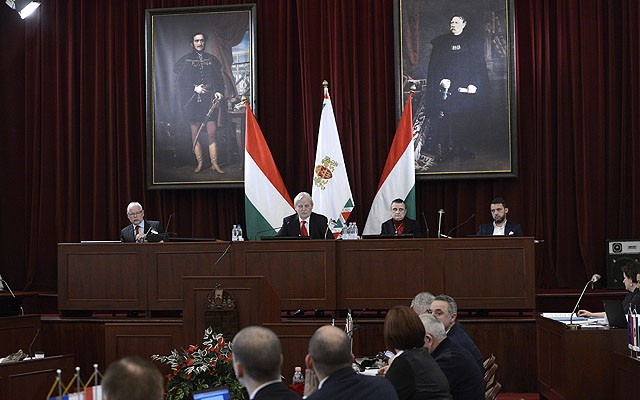 A proposal to hold a referendum to decide whether Budapest should bid or not for the 2024 Olympics and Paralympics was narrowly defeated in the Hungarian capital today.

The idea was put forward in the Budapest City Council, but was rejected by 16 votes to 14, with two abstentions.

It had been proposed by Socialist Council member Csaba Horváth.

"Based on the current proposal the Budapest Olympic Games cannot be supported because only those who foot the bill [the taxpayers] can decide about its fate," she had said before the vote.

Budapest Mayor István Tarlós, a leading supporter of the bid having initially been against the idea, made it clear he did not agree with allowing local citizens having the right to decide the campaign's fate.

"I absolutely respect referenda, and we will vote on the proposal," he told the City Council.

"It is an open question, however, whether two years before the hosts are chosen voters have enough information about hosting the Olympic Games."

Budapest is led by Tarlós, an independent, but the ruling Fidesz party of Prime Minister Viktor Orban supports him and holds a comfortable majority in the City Council.

Following the decision not to hold a referendum, the City Council formally approved the formation of a Bid Committee in association with the Government and Hungarian Olympic Committee.

The non-profit organisation will be tasked with compiling the Candidature File for Budapest 2024 and promoting the campaign in Hungary and internationally.

The decision not to hold a referendum will be a relief to International Olympic Committee (IOC) President Thomas Bach following the surprise rejection on Sunday (November 29) of citizens in Hamburg to back a bid for the 2024 Games from the German city.

Several European cities had also been forced to drop proposed bids for the 2022 Winter Olympics and Paralympics following referendums, including Munich and Kraków.

"If decision-makers are unable to make decisions, then they are unfit for what they were voted for."

Horváth's call for a referendum coincided with the publication of a new poll that showed public support for Budapest's bid was increasing.

A total of 53 per cent are now behind the bid, according to a telephone poll conducted by Nézőpont Intitute, a Budapest-based think tank.

Similar polls in August 2014 had shown only 40 per cent supported the campaign, while in July it was 49 per cent.

Perhaps just as significantly, those opposed to the bid had dropped from 50 per cent recorded in August 2014 to 42 per cent in July, and now to 36 per cent.

Budapest is one of four cities left in the contest to host the 2024 Olympics, along with Los Angeles, Paris and Rome.