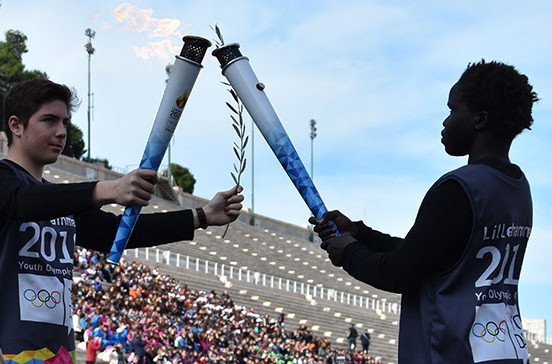 Lillehammer 2016's Winter Youth Olympic Games Flame has been lit today in the Panathenaic Stadium in Athens to begin a Torch Relay visiting all 19 Norwegian Provinces ahead of the event next February.

In a clash of old and new, the Flame was lit in traditional fashion by the sun’s rays reflected in a parabolic mirror.

A priestess from the Temple of Hera passed it on to the first relay runner in the Stadium in the Greek capital, which hosted the first Modern Olympics in 1896, before young athletes from Norway and Greece conducted the opening exchange.

Lillehammer 2016 chair Siri Hatlen and chief executive Tomas Holmestad were among those present, along with representatives from the Norwegian Olympic and Paralympic Committee and Confederation of Sports and the Hellenic Olympic Committee.

Grace Bullen, a young Norwegian athlete and Nanjing 2014 Summer Youth Olympic Games champion in wrestling, was also present in her role as ambassador for the campaign “Klubben i mitt hjerte - the club in my heart”.

“The lighting of the Youth Olympic flame is a major milestone for Lillehammer 2016," said Holmestad during the ceremony.

"We’re getting so near the Games that we literally can feel the heat of it, and, with this flame being lit, we are ready to welcome the world to Norway.

“This Youth Olympic flame will not only raise awareness of the Lillehammer Youth Olympic Games, but it will also help us to highlight and celebrate the many young volunteers in Norwegian sports along its journey throughout Norway in the build-up to the Games.”

The Flame began its journey immediately after the Ceremony, and is due to arrive at the Norwegian Parliament in Oslo tomorrow, where a celebration will take place.

It will then travel across the whole of the Scandinavian country, visiting all 19 provinces in a celebration of youth sports.

Each Province will nominate one young change maker to light the Flame, something done in partnership with local regional sports leaders.

This will mark a major test considering the widespread opposition against Oslo's bid for the 2022 Winter Olympics and Paralympics from across the country.

The effort was eventually abandoned late last year due to ever-dwindling public and political support.

Youth Olympic organisers insist, however, that opposition is far lower this time around.

The Flame is then due to arrive in Lillehammer, the resort which hosted the 1994 Winter Olympics, in time for the Opening Ceremony on February 12.