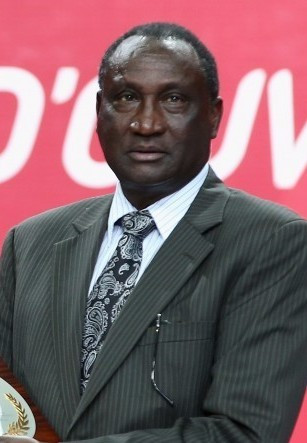 Athletics Kenya chairman Isaiah Kiplagat has been accused of accepting a gift of two motor vehicles from the Qatar Association of Athletics Federation (IAAF) when Doha was successfully bidding to host the 2019 World Championships last year.

Kiplagat, also formerly a member of the International Association of Athletics Federations (IAAF) Council, has been provisionally suspended by the IAAF Ethics Commission, chaired by British Queen's Counsel Michael Beloff, from any involvement in the sport.

Doha successfully overcame Eugene and Barcelona to be awarded the Championships by the IAAF Council last November.

Okeyo, also a vice-president of Athletics Kenya, is alleged to have siphoned off funds from a sponsorship deal between the national association and the American sportswear giant.

The duo have relinquished their roles within the national and international bodies for the next 180 days, along with Joseph Kinyua, the Federation's former treasurer.

Kinyua had also been team leader of Kenya's squad at this year's IAAF World Championships in Beijing, where they finished as the leading country with a total of 16 medals, including seven gold.

"The chairman of the Ethics Commission has imposed these Orders for Provisional Suspension having carefully considered the complaints, evidence and information referred to the Ethics Commission, which disclose prima facie cases, i.e. cases warranting investigation, against Mr Kiplagat, Mr Okeyo and Mr Kinyua in relation to (1) potential subversion of the anti-doping control process in Kenya and (2) potential improper diversion from Athletics Kenya of funds received from Nike," a statement said.

"A prima facie case has also been found to exist in respect of Mr Kiplagat in relation to receipt, personally or by Athletics Kenya, of an apparent gift of two motor vehicles from the Qatar Association of Athletics Federation in the period 2014 to 2015.

"The Ethics Commission stresses that the imposition of Orders for Provisional Suspension in this case in no way prejudges the outcome of the investigation which will now be carried out by the Commission’s appointed investigator, Mr Sharad Rao.

"Mr Kiplagat, Mr Okeyo and Mr Kinyua remain presumed innocent until the outcome of the investigation and the determination of any disciplinary chargeswhich may follow from that investigation."

Rao, is a former Director of Public Prosecutions in Kenya and the current chairman of the Judges and Magistrates Vetting Board, to head the investigation.

Rao is also a member of the Court of Arbitration for Sport and of the Code of Conduct Commission of the International Cricket Council.

The decision comes a week after Kenyan athletes carried-out a two-day occupation of the Athletics Kenya  building at Riadha House to protest against allegations of corruption.

The sit-in was ended only by the intervention of the Kenyan Sports Ministry.

They asked both Kiplagat and Okeyo to step-aside while a full investigation is carried out.

"We have had a fruitful discussion with the AK official and the athletes' representatives and accepted that the only way forward was to resolve the issue," said Sports Ministry official Richard Ekai.

The IAAF announcement today follows changes to the Procedural Rules and the Statutes of the IAAF Ethics Commission which were approved by the Council during their meeting last week in Monte Carlo.

Investigations are no longer restricted to complaints filed by a member of the "IAAF Family", with the Commission able to initiate an investigation if reliable information comes to its attention from any other source.

The disciplinary process under the Code may be streamlined in appropriate cases, for example, if there is no dispute on the facts.

Provisional suspensions can also be awarded much earlier in the process "pending the conclusion of an investigation or decision of a Panel of the Commission".