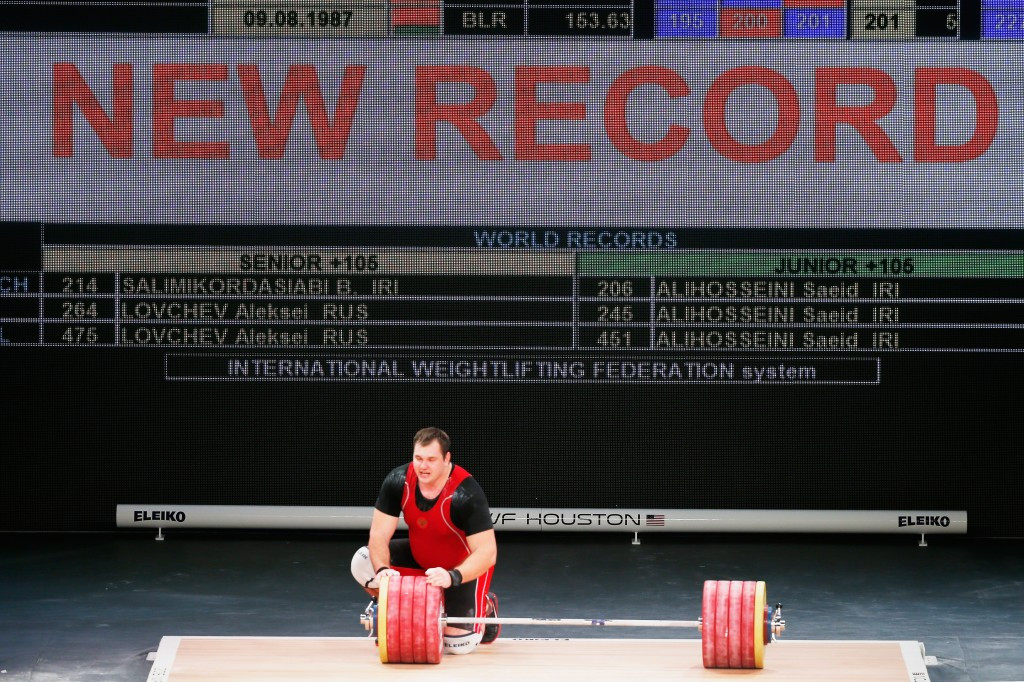 Aleksei Lovchev broke the men’s over 105 kilogram clean and jerk and overall world records on the final day of the action here at the International Weightlifting Federation (IWF) World Championships, which saw Russia win all six gold medals up for grabs.

Lovchev made a winning lift of 211kg in the snatch before going on to claim the clean and jerk title with 264kg, eclipsing the previous world record mark of 263kg set by Iran’s Hossein Reza Zadeh at the Athens 2004 Olympic Games.

The Russian's two best lifts gave him a total of 475kg, which surpassed another world record held by Reza Zadeh who amassed 472kg at the Sydney 2000 Olympic Games.

Georgia’s Lasha Talakhadze finished second overall having taken silver in the snatch with 207kg and bronze in the clean and jerk with 247kg.

Completing the podium was Estonia’s Mart Seim, who despite coming 13th in the snatch, won the silver medal in the clean and jerk with 248kg for a total of 438kg.

The weight category’s other medallist was Armenia’s Gor Minasyan, rounding off the top three in the snatch with 203kg.

Lovchev, who lifted 257kg to win the clean and jerk at last year’s World Championships in Almaty, said he thought it would be impossible to pull off 264kg.

"I had never tried that weight before - I’m overwhelmed," said the 26-year-old.

"This shows that Russia is the strongest nation.

"I could never have done it without the support of my parents.

"My father is my coach and he introduced me to weightlifting.

"My mother passed away in 2012 and I dedicate this victory and the records to her.

"When I was little I used to watch Reza Zadeh on television, lifting enormous weights.

"He was an example to me and I never imagined I would one day take his records."

Among the absentees in the event was 2013 and 2014 overall world champion Ruslan Albegov, a compatriot of Lovchev.

"He will compete at the [Russian] President’s Cup in Grozny next month," explained Lovchev.

"It was decided that I would come here to the World Championships and he would be the team leader in the President’s Cup.

Meanwhile in the final event of the World Championships, there was another triple gold medal-winning success for Russia as Tatiana Kashirina defended her women's over 75kg snatch, clean and jerk and overall titles.

The 24-year-old topped the snatch standings with 148kg before registering 185kg in the clean and jerk to give her a total of 333kg.

Like at the 2014 World Championships, China’s Suping Meng had to settle for three silvers with lifts of 145kg in the snatch and 180kg in the clean and jerk, and a total of 325kg.

The bronze medallist in the snatch was Thailand’s Chitchanok Pulsabsakul with 136kg, while North Korea’s Kuk Hyang Kim came third in the clean and jerk with 168kg and overall with 298kg.

Kashirina’s emphatic triumph takes her world title tally in the event to 12, beating the record for a single weight class by either gender since the introduction of the current categories in 1998.

Until today, that was held by China’s Wang Mingjuan, who has 11 to her name in the women’s 48kg.

Despite her success, Kashirina was disappointed not to trouble any of the three world records she set at last year's World Championships - 155kg in the snatch, 193kg in the clean and jerk and 348kg in the overall.

"I don’t know what happened - I just didn’t feel comfortable tonight and I’m a bit ashamed that I didn’t at least go for the record," she said.

"But as long as I’m young and strong and healthy I will keep doing my best.

"Let’s see what happens in Rio."

As for the women's over 75kg B class, Kazakhstan's Alexandra Aborneva headed the rankings with 267kg.