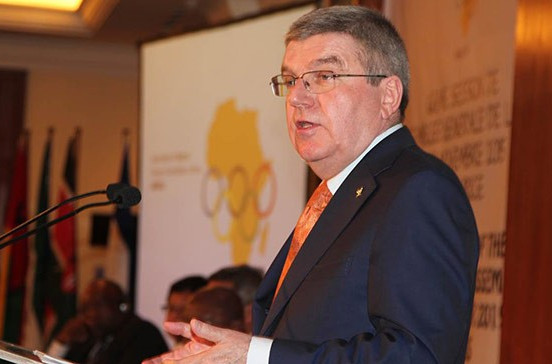 NOCs must strive harder to catch cheats, he warned, or all teams risk being tainted and associated with cheating.

"I would really encourage you all to make an extra effort into your anti-doping programme before the Olympic Games in Rio de Janeiro," the German said during his address at the annual meeting in Mauritius' capital.

"You can win all the medals you were dreaming, but if one of these victories is tinged with scandal for doping, then all your medals and all your athletes are tainted, and the honest athletes do not deserve this.

"You must protect the integrity of your athletes' Olympic delegation in making the fight against doping a priority.

"You must try to catch cheaters before the Olympic Games in Rio so they are punished, so that they are exposed, and to show that you hunt down cheaters to protect athletes who play by the rules."

Greater light has been shone on problems in other countries, including in Kenya, where 38 athletes have tested positive for banned substances in recent months.

WADA has threatened the nation with expulsion from the Games if "unsatisfactory" answers are given in response to questioning over problems.

No African nations have yet been sanctioned by WADA, but athletes from multiple other countries in the continent have tested positive in recent years.

Bach was speaking to representatives from all 54 African NOCs at the beginning of the meeting chaired by Ivory Coast's ANOCA President Lassana Palenfo.

Recent scandals have also shone a light onto administrative corruption within the Olympic Movement.

Continental bodies must strive to maintain the credibility of sports competitions and sports organisations, Bach claimed, adding: "You can not separate the two".

"I do not tire of repeating that we must strive, in agreement with the Olympic Agenda 2020, to safeguard the credibility of sport because it is the only way we will win our own credibility.

Each NOC must "look closely at their organisation, to identify possible measures to be taken and areas where change might be needed", he urged.