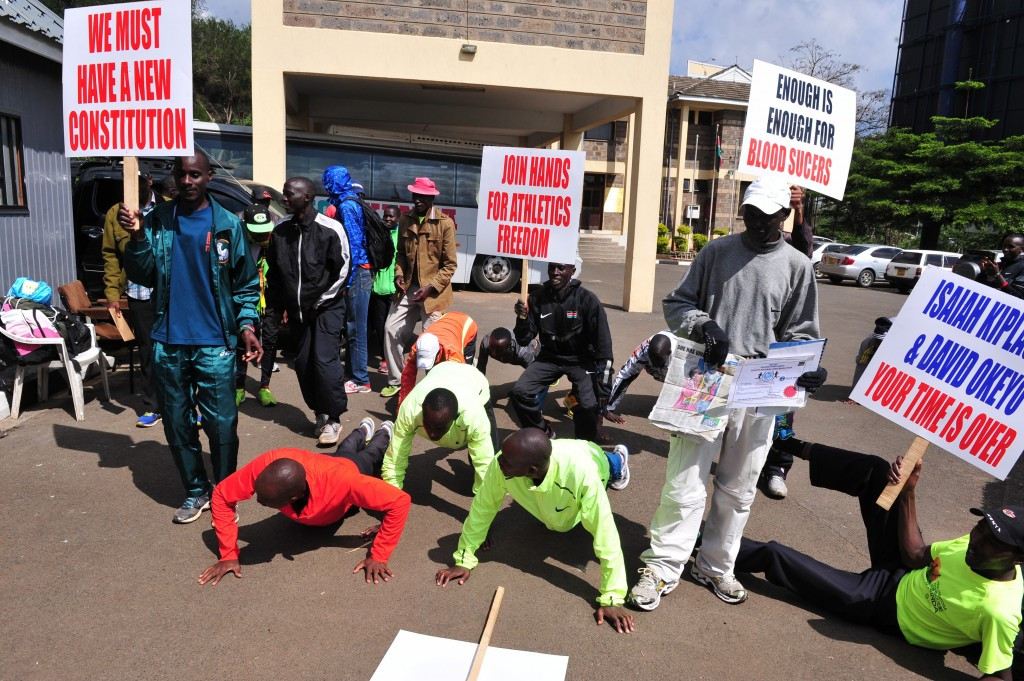 Kenyan athletes have been urged to respect the "rule of law rather than the jungle" by the country's Sports Commissioner as their two-day occupation of the Athletics Kenya headquarters in Nairobi came to an end.

An agreement was reached between competitors and administrators, brokered by the Sport Ministry, which called for an amendment in the governing body's constitution to give athletes more say and for officials implicated in alleged corruption to step aside.

Disgruntled competitors had locked themselves inside the building at Riadha House on Monday (November 23) to protest the regime of Athletics Kenya chairman Isaiah Kiplagat, who is accused of covering up doping.

Both Kiplagat and vice-president David Okeyo are expected to be asked to step-aside while a full investigation is carried out.

"We have had a fruitful discussion with the AK official and the athletes' representatives and accepted that the only way forward was to resolve the issue," said Sports Ministry official Richard Ekai.

It reportedly led to the cancellation of a planned Executive Committee meeting to be chaired by Kiplagat.

"We believe in the rule of the law," said Kenya's Commissioner for Sports, Gordon Oluoch, when trying to resolve the dispute.

"So even if the athletes have genuine cases, they must operate within the confines of the law, not through the law of the jungle.”

As well as the accusations against Kiplagat, who failed in a bid to become an International Association of Athletics Federations (IAAF) vice-president in August, Okeyo is also accused of illegally siphoning off funds from a sponsorship deal between the national association and American sportswear giants Nike.

The IAAF announced last week that it had been investigating Kenya since March, which came after Richard Pound, who led the World Anti-Doping Agency (WADA) Independent Commission report, claimed “it’s also pretty clear there is a lot of performance enhancing drugs being used in Kenya”.

This marks the most significant protest by athletes as worldwide discontent grows against the percieved corruption of athletics administrators, with former IAAF President Lamine Diack remaining under investigation by Interpol after, it is was alleged he accepted bribes to cover up doping cases involving Russian athletes.

“What I heard is that some athletes were entering the headquarters of the National Athletics Federation," Bach told the International Sports Press Association (AIPS).

"This has to be taken very seriously and addressed.

"I will take the opportunity here to meet with the representatives of the Kenyan [National Olympic] Committee."