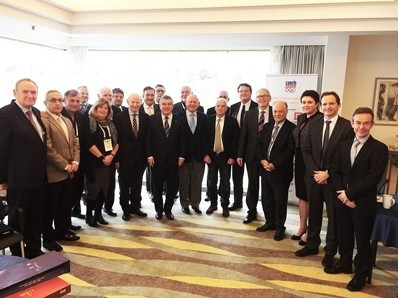 Budapest's bid to host the 2024 Olympics and Paralympics has received an early boost after several of its neighbours and other European countries publicly pledged their backing.

A total of 16 NOCs from Albania, Austria, Bosnia and Herzegovina, Bulgaria, Croatia, Czech Republic, Cyprus, Greece, Macedonia, Montenegro, Poland, Romania, Serbia, Slovakia, Slovenia and Turkey have jointly announced their support for Budapest, chosen earlier this month as the European Capital of Sport for 2019.

The resolution was proposed by the President of the Croatian Olympic Committee and EOC Executive Board member, Zlatko Matesa, ahead of the EOC General Assembly in Prague.

The 16 NOCs supporting the resolution affirmed their collective conviction that Budapest was capable of hosting the Summer Olympic Games in 2024.

They also noted that the city's location at the heart of the European Central and Southern regions made it the natural choice for the NOCs of these countries.

The total population of the Central and Southern European regions top 200 million people – making Budapest one of the most accessible cities in Europe, Hungarian officials claim.

They are, however, not obligated to vote for Budapest 2024 ahead of its rivals Hamburg, Los Angeles, Paris and Rome as they vote as individuals and not at the direction of their country's NOC.

The announcement is, nevertheless, still a fillip for the Hungarian capital.

“This announcement by my colleague Mr. Zaltko Matesa is a testament to the new rules under Agenda 2020 – Budapest is the right sized city, it is an Olympic sized city and those countries surrounding us will benefit from having a global sporting event hosted in the centre of the region," said Bence Szabo, general secretary of the Hungarian Olympic Committee.

"Hosting the Summer Olympic Games in 2024 would see the games come to this region for the first time in Olympic history."

The IOC is due to choose the host city at its Session in Lima in 2017.