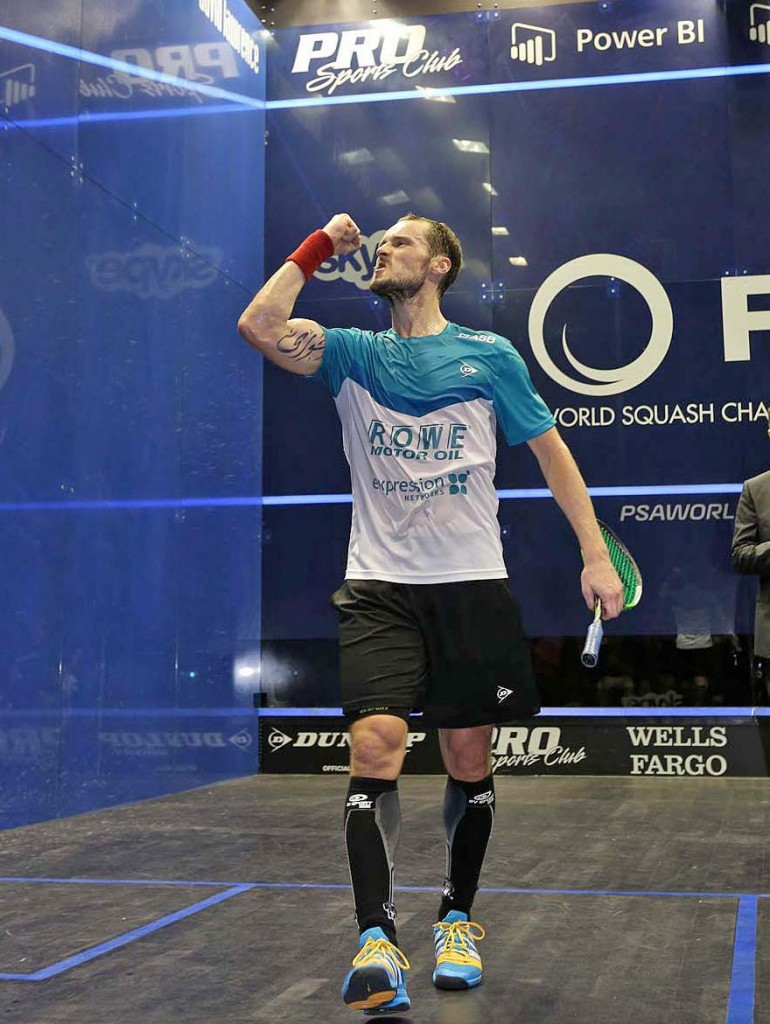 Four-times runner-up Gregory Gaultier of France will get another shot at claiming his maiden Professional Squash Association (PSA) Men’s World Championships title after he reached the final of this year’s event with a classy victory over England’s James Willstrop at the Maydenbauer Centre in Bellevue.

The Frenchman, seeded third, made light work of the Englishman, who had knocked out world number one Mohamed Elshorbagy of Egypt earlier on in the tournament, by cruising to a straight-games win in just 50 minutes.

Gaultier took the game to his opponent from the outset and rarely looked troubled throughout the encounter, eventually emerging with a deserved 11-1, 11-8, 11-8 triumph to set up a meeting with Egyptian Omar Mosaad in tomorrow’s final.

Mosaad, who has also been in giant-killing form during the competition having ended compatriot Ramy Ashour’s pursuit of a second consecutive crown at the quarter-final stage, clinched a commanding 11-4, 11-4, 11-8 success against teammate Tarek Momen.

“I’ve lost four finals in my life and I had five match balls and obviously didn’t make it,” Gaultier said.

“But I am more than motivated to win tomorrow.

“I came here and I was sick the first few days and I was struggling but I had to deal with it.

“The motivation makes the difference at the end of the day - if your head is there you can deal with anything.”

The third seed, who squandered five match points in his 2006 final defeat to Australia's David Palmer, revealed he is hoping to win the tournament for his country following the devastating terrorist attacks in Paris on November 13, where at least 130 people lost their lives.

"Everybody was really touched about what happened in France and what’s happening at the moment in the whole world - I’m determined to make it for myself, for my country, for my team and for everybody who supports me in the world,” he added.

Number seven seed Mosaad produced one of the best performances of his career to oust compatriot Momen in another one-sided last four contest, starting in ominous fashion by taking the opening game 11-4.

He replicated that scoreline in the second to move within one game of victory and fended off a brief fightback from Momen to book his place in the final.

“To be in the final of the World Championship is an amazing feeling,” Mosaad said.

“It’s the second time this season I’ve made a big final so I’m really happy and I hope I can play well tomorrow and win.

“Today was tough but I will pick myself up now, recover, and hopefully come back strong tomorrow.

“Three months ago my family had an accident and I lost two of them, so I hope I can win tomorrow and dedicate this title to my father because he deserves it.

“He’s been a role model for me and I want to win for him.”