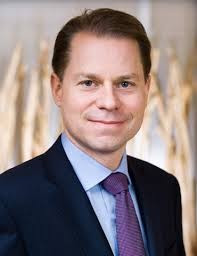 Olivier Niggli will replace David Howman as director general of the World Anti-Doping Agency (WADA), it was decided at the organisation's Executive Committee meeting in Colorado Springs.

Niggli will step-up from his current roles as chief operating officer and general counsel, having also served 10 years as the body's legal director and chief financial officer from 2001 to 2011.

Niggli, a graduate of the London School of Economics and McGill University in Montreal, will start transitioning into the new role on January 1 before officially replacing Howman when the New Zealander's 13-year tenure in the role ends on July 1.

"I am thrilled to be taking on this new challenge with WADA at somewhat of a juncture for anti-doping,” he said.

“I look forward to dedicating my energy and skills towards protecting the clean athlete.

“Over the coming months, I will continue working closely with David and my colleagues to ensure a smooth leadership transition.

"In particular, I will focus on strengthening our relationships and interactions with our sport, National Doping Organisation and government partners at this pivotal time."

Considered an expert in legal, financial and governance areas, the Lausanne-based lawyer, fluent in both English and French, will play a key supporting role to WADA President Sir Craig Reedie.

The Briton has been under increased pressure in recent weeks as the body battles to respond to the WADA Independent Commission Report last week, which confirmed allegations of systemic doping within Russian athletics.

“After a thorough search, we were unanimous in our choice,” Sir Craig said.

“Olivier Niggli’s industry experience, deep knowledge of WADA's business and strategy, and leadership qualities will continue to strengthen the Agency’s position as the global leader of clean sport.

"Sometimes you are fortunate enough to find the optimal choice close to home.

“I would also like to take this opportunity to thank David for his dedication and fortitude in shaping today's WADA and wish him all the best in his future endeavours."

Doping problems in Russia and elsewhere are also on the agenda at the Executive Committee and Foundation Board meeting, due to take place in Colorado Springs tomorrow.

It is expected to discuss what criteria Russia must fulfill following the removal of accreditation from its existing anti-doping laboratory in Moscow last week.

A truly independent anti-doping body, under the auspices of WADA, will also be discussed following a proposal at last month's Olympic Summit in Lausanne.

Related stories
November 2015: Future of Russian Anti-Doping Agency set to be discussed by WADA Executive Committe and Foundation Board
June 2015: Howman to leave WADA after 13 years