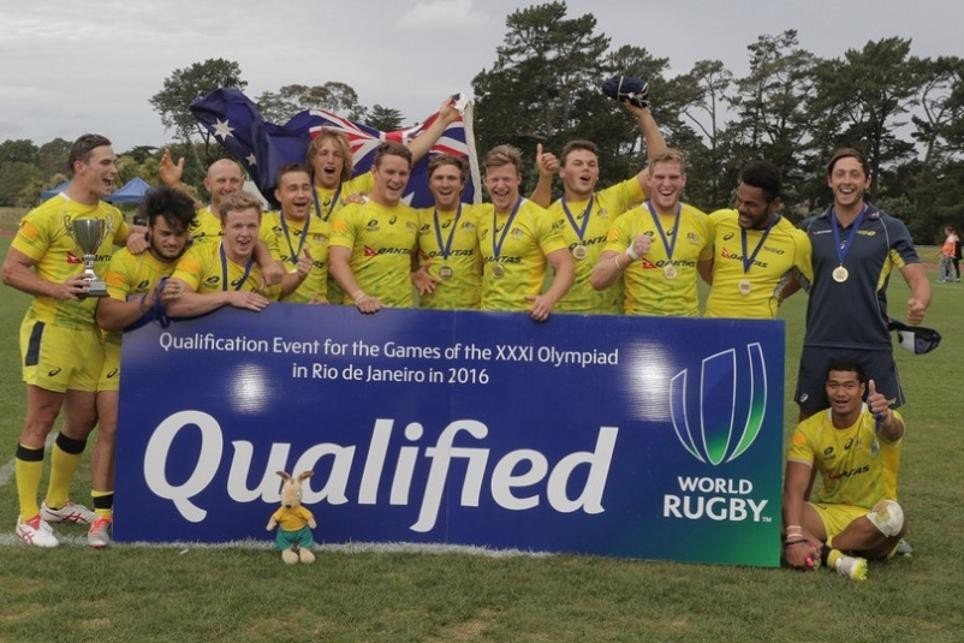 Australia cruised to victory over Tonga in the final of the Oceania Rugby Sevens Championship in Auckland to book their place at next year's Olympic Games in Rio de Janeiro.

While all eight competing teams in the Championship qualified to the quarter-finals from the pool phase Australia’s three victories gave them a straightforward tie against minnows American Samoa, who had finished bottom of Pool B.

Unsurprisingly, the Australian team recorded a comprehensive 52-0 victory before recording a routine 36-0 win over Papua New Guinea in the semi-final to move one match away from sealing an Olympic berth.

A final showdown with Samoa had been predicted ahead of the Championship, however, the four-time champions were stunned by a superb display by Tonga in their semi-final, with the Pacific Games bronze medallists emerging 41-5 winners.

The effort appeared to take their toll on the Tongans in the final, however, as Australia stormed into a 31-0 half-time advantage with their captain Ed Jenkins claiming two tries.

The Australians continued to dominant in the second period to eventual emerge as 50-0 winners and seal their place at Rio 2016, having missed out on one of four places up for grabs in the 2014–2015 HSBC Sevens World Series after finishing fifth.

“The boys put in a ruthless performance in that last game and it was just desserts for the effort they have put in - not only in the last three months with me, but for the last three or four years too,” said Tim Walsh, interim coach of Australia’s men’s team.

"This is a great way to start a new chapter, a new stage in what will be a massive year with the Olympics at the end of it.

"It's a weight off everyone's shoulders [qualifying for Rio] - if you look at it in a positive way, then these players will be battle-hardened and more able to handle those pressure situations."

Tonga and Samoa will still hold a hope of earning a place at Rio 2016 having qualified for the Final Olympic Qualification Tournament, due to take place in June.

Australia’s victory ensured they will have representation in both the men’s and women’s competitions at Rio 2016, where rugby sevens will make its Olympic debut.

Fiji will also feature in the two events after their women’s team secured the Oceania Rugby Sevens Championship title.

After cruising to a 58-0 win over Papua New Guinea in the semi-final of the four-team tournament, the Fijiana knew a victory in the decider against Samoa would see them join their men’s team, who won the 2014–2015 HSBC Sevens World Series, at the Olympics.

Their place was secured courtesy of a dominant 55-0 triumph, with Rusila Nagasau starring having scored four tries during the match.

A thrilling conclusion to the 2015 Rugby Africa Men's Sevens Championship in Johannesburg saw Kenya join the already qualified South Africa at Rio 2016 as they earned a last gasp victory over Zimbabwe.

Both nations had proved to be a class above their rivals throughout the tournament and a crunch encounter for the sole Olympic berth was set up after Kenya had overcome Tunisia 42-12 in their semi-final, with Zimbabwe having beaten Morocco 26-0 in their last four match.

Zimbabwe appeared to have secured the Championship title and Rio 2016 berth after a try in the final 30 seconds of the match gave them a 17-14 lead, however Kenya were able to keep the ball alive after the match restarted and worked an opening for Dennis Ombachi to cross the Zimbabwean try-line with the final play to give his team a 19-17 victory.

Following their late defeat Zimbabwe will join the beaten semi-finalists Tunisia and Morocco in the Final Olympic Qualification Tournament, where the one remaining spot in the men's Olympic tournament will be claimed.