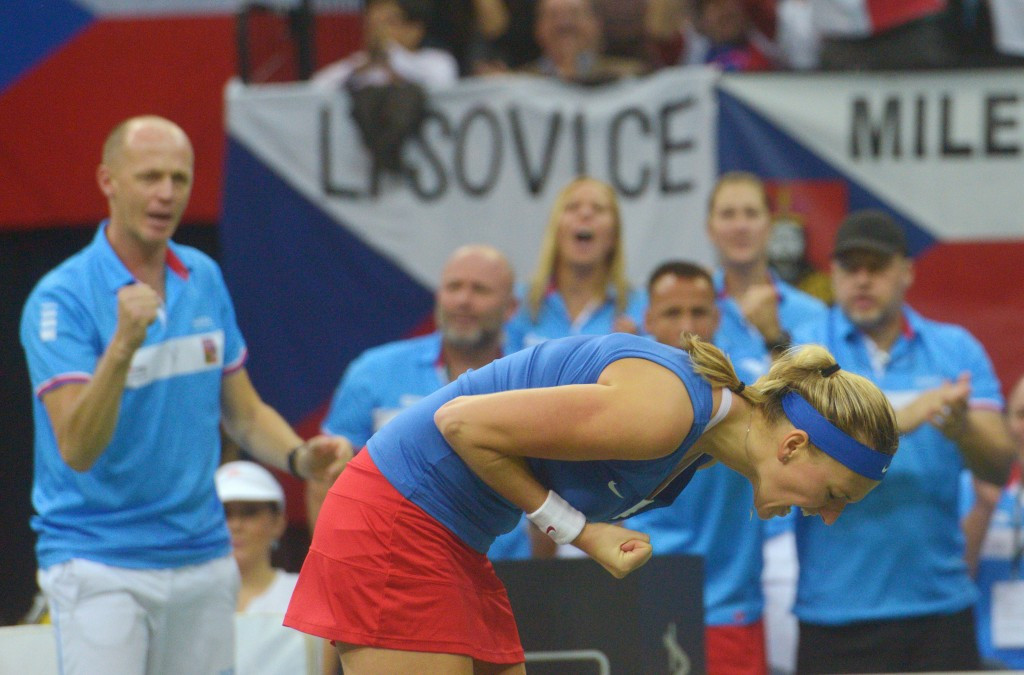 Defending champions the Czech Republic are tied 1-1 with Russia at the end of the opening day of the 2015 Fed Cup Final after both country's top ranked players claimed victories in their respective singles rubbers at the O2 Arena in Prague.

Czech player Petra Kvitova came from behind to claim a 2-6, 6-1, 6-1 triumph against Anastasia Pavlyuchenkova in front of her home fans before Russia's Maria Sharapova levelled things with a 6-3, 6-4 win over Karolina Pliskova.

The hosts were hoping world number six Kvitova would claim an early victory as they look to secure a fourth title in the past five editions of the women's team tennis tournament, but the two-time Wimbledon champion was surprised by a fast start by Pavlyuchenkova.

The Russian produced several excellent shots to break in Kvitova’s second service game and with the crowd quietened and her opponent rattled, she took a huge stride towards the opening set by claiming a double break for a 4-1 lead.

Having earned three break points at 5-2 down Kvitova showed a brief threat of working her way back into the set but the home favourite passed up the opportunities, with Pavlyuchenkova holding her nerve to take an early lead in the match.

The closing stages of the first set, however, showed that the momentum was beginning to swing into Kvitova’s favour and the Czech took full control of the second set by storming into a 4-0 lead on route to levelling the contest.

Pavlyuchenkova was unable to stem the tide as the Russian was broken again at the start of the decider and Kvitova cruised through to complete her victory.

The result put more pressure on world number four Sharapova, competing in the Fed Cup Final for the first time in her career, but the Russian thrived in the situation in her tie against Pliskova.

Despite the early stages of the match seeing little between the two players, a run of three consecutive breaks followed with Sharapova moving into a 5-3 lead, before she held serve to take the opening set.

Sharapova was then broken in her opening service game of the second set, but she stormed back from 2-0 down to take a 3-2 lead as she looked to claim a routine victory.

A loose game offered Pliskova three chances to level the scores, but Sharapova eventually held serve and sealed her win to leave the final all-square at the close of the first day of competition.

The final is due to continue tomorrow with Kvitova set to face Sharapova in a huge looking clash, while Pliskova will play Pavlyuchenkova.

If required, a doubles clash between Czech pair Lucie Safarova and Barbora Strycova and Russians Ekaterina Makarova and Elena Vesnina is also scheduled in the best of five final.