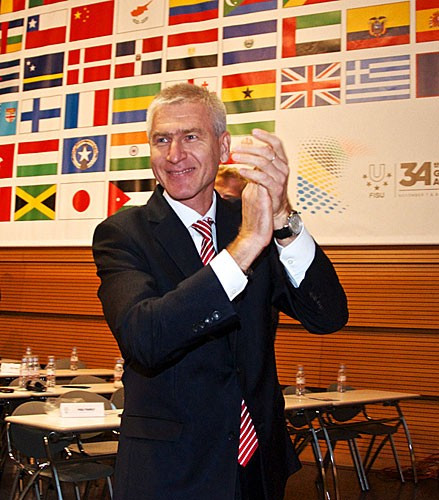 Russia’s Oleg Matytsin has been elected as the new President of the International University Sports Federation (FISU) after beating French incumbent Claude-Louis Gallien at the body’s General Assembly in Lausanne.

Matytsin, vice-president of the Organising Committee of the 2019 Winter Universiade in Krasnoyarsk, amassed 102 votes, while Gallien, who had been in charge of FISU since 2011, only received 23.

Matytsin, 51, has led Russia’s delegations at the respective Universiades for the previous decade and will hold the position as FISU President for at least four years.

“I’m very proud to be elected as the new FISU President, I’m fully aware it is a great responsibility for me and my team,” Matytsin said.

“We need to establish first our tradition, but at the same time we have to continue to be very modern.

“Our main task is to involve as much as we can the Continental Federations and the National University Sport Federations in close cooperation with the International Sports Federations but also the international organisations such as UNESCO for instance.

“We have great resources and great traditions, I’m confident we will be successful.”

As well as Matytsin replacing Gallien at the helm of the organisation, FISU members also elected a new Executive Board, who will serve until 2019.

Taipei will play host to the 2017 Summer Universiade.

The Winter Universiade is due to be held in Kazakh city Almaty, which lost out on the right to host the 2022 Winter Olympic Games.

At the General Assembly, Aruba, Afghanistan and Gambia were admitted as the body's newest Member Associations, bringing the total number to 170, and presentations on the upcoming Universiades were also shown.

Krasnoyarsk is scheduled to stage the 2019 Winter Universiade.

International Olympic Committee President Thomas Bach was in attendance and gave a welcome address, in which he thanked FISU for allowing him to speak as university sport “played an important part in my life”.

Bach, winner of an Olympic gold medal in fencing at Montreal 1976, added: “FISU and the IOC are saving the values of sport, maybe more important now than ever.

"We all have to learn our lessons and draw conclusions in this changing world.

“We have to change at the time of success, to change for not being changed.

“Please continue in this respect of being a good partner of the IOC.

"If we can help with our experience, we are happy to do so.

“Our doors are always open to you.”