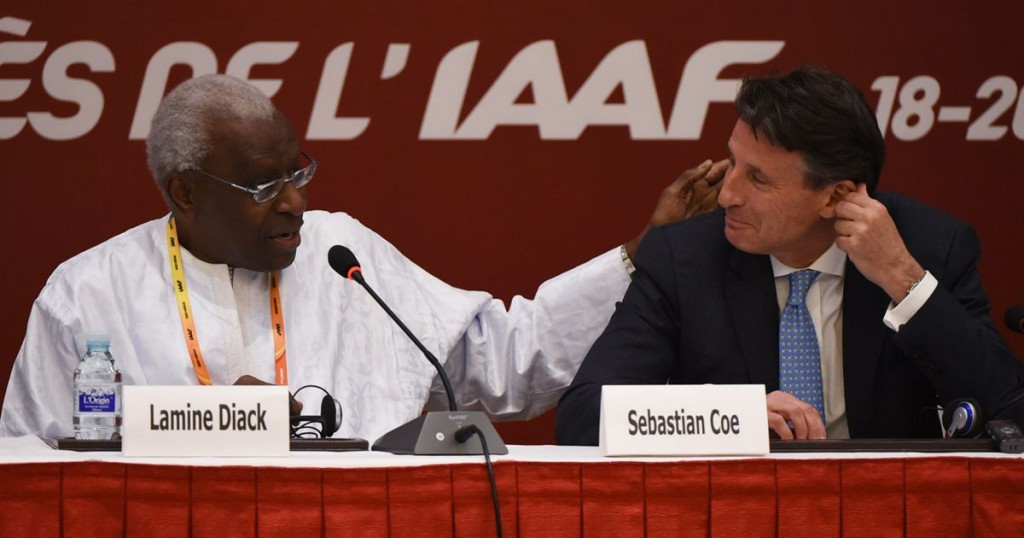 International Association of Athletics Federations (IAAF) President Sebastian Coe has claimed he is "more determined than ever to rebuild this sport and restore trust" following the scandal involving his predecessor Lamine Diack, who allegedly accepted cash to cover up positive doping cases involving Russian athletes.

Coe was making his first public response since Diack was placed under official investigation.

The 82-year-old Senegalese is alleged to have received “more than €1 million”  in bribes since 2011 to cover up positive doping tests of Russian athletes, the office of France's financial prosecutor said during last week.

Coe told the BBC Radio 5 programme Sportsweek there was "clear shock, anger and sadness...these are dark days for our sport".

The double Olympic 1500 metres gold medallist added: “That people in our sport have allegedly extorted money from athletes guilty of doping violations is abhorrent."

Coe's response came as The Sunday Times in London claimed that Olympic gold and silver medallists from London 2012 are among eight Russian athletes who paid bribes to avoid suspensions after testing positive for banned performance-enhancing drugs.

Russia won a total of 17 medals in athletics at London 2012, including eight gold and four silver.

The allegations are reportedly contained in a report to be published by the World Anti-Doping Agency (WADA) Independent Commission in Geneva tomorrow.

The Commission, chaired by former WADA President Richard Pound, is also expected to confirm all the major allegations made last December by German broadcaster ARD.

These include that Grigory Rodchenkov, head of the WADA-accredited lab in Moscow, was involved in the falsifying of doping athletes; that suspicious blood values recorded in samples from a number of athletes, known to the IAAF were not followed-up properly; and that some athletes in other sports, including biathlon, cycling, skiing and weightlifting, were deliberately not tested.

Richard McLaren, a member of the Commission, has claimed the report, which is several hundred pages, is a "game-changer" for sport and was a bigger scandal than the current FIFA crisis.

"Those other scandals involved a failure of the governance of the organisations that enabled [officials] to line their pockets." McLaren, an international sports lawyer, said.

"But despite all of that misconduct, it didn't really effect what went on, say with FIFA, at the World Cup, on the playing field.

"Here [in the athletics scandal], you have people putting money in their pockets and also either delaying the processing of doping positives, or covering those positives up.

"What happens as a result is that a [guilty] athlete is able to compete.

"And it's effecting athletes all over the world competing in the same competitions and those who might have been able to compete if there had been more spaces available if the other athletes had been banned.

"That's the difference, what the [corrupt FIFA and IOC officials] did, didn't really effect the competitions, but what has been happening here effects the competition results very dramatically."

"I am more determined than ever to rebuild this sport and restore trust"— Seb Coe (@sebcoe) November 8, 2015

Coe claimed that he had no idea of what had been happening at the IAAF until he was contacted by French police last week, despite having been vice-president of the world governing body for seven years before being elected to replace Diack.

"The day after I got elected, I started a massive review," Coe told Sportsweek.

"Understandably, in the light of the allegations that have been made, that review has been accelerated.

"I'm more determined than ever to rebuild the trust in our sport.

"However, this is a long road to redemption."

There have been widespread calls for Russia to be banned from next year's Olympics in Rio de Janeiro as a result of the allegations.

Coe, though, has more or less ruled out that option.

"My instinct is that these things are better changed through engagement not isolation," he said.