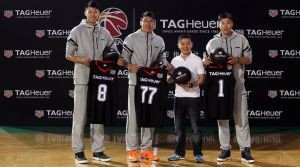 Swiss watchmaker Tag Heuer has signed a two-year deal to become the official timekeeper and watch partner of the Chinese Basketball Association (CBA).

The agreement, which runs until the end of the 2016-2017 season, was announced at a special event at the Beijing Olympic Sports Centre, attended by three household names from Beijing Beikong Baskeball Club, Yu Liang, Li Xuesong and Yu Xuelin.

The company will produce a CBA-themed watch next year and will help develop the sport in the country by contributing to basketball education in China.

“This new partnership between Tag Heuer and CBA brings the two brands to a greater platform and will allow younger audiences to understand our core spirit,” Leo Poon, Tag Heuer’s general manager of greater China, said.

“Chinese basketball carries the passion and dreams of millions.

“We are confident this partnership will inject great avant-garde spirit and unprecedented cooperation to support the future development of Chinese basketball and young players in the future.”

The deal with Tag Heuer, founded in Saint-Imier in 1860, was orchestrated by Infront Sports and Media, who have helped the CBA negotiate partnerships with sportswear giants Nike, Chinese brand Li Ning and delivery company UPS in recent years.

Infront Sports and Media’s deal with the CBA is reportedly worth around $270 million (£179 million/€251 million) to the governing body.

Although the official financial figures of the CBA’s agreement with Tag Heuer have not been released, it is thought the partnership is worth a multi-million dollar sum each year.

Tag Heuer signing with the CBA comes after the Swiss company named National Football League star Tom Brady, who plies his trade for the New England Patriots, as a brand ambassador, while Charlotte Hornets point guard Jeremy Lin holds a similar role for the watchmaker.

The deal between Tag Heuer and the CBA was made in time for the start of the new CBA regular campaign, where the Beijing Ducks will bid for a fourth title.