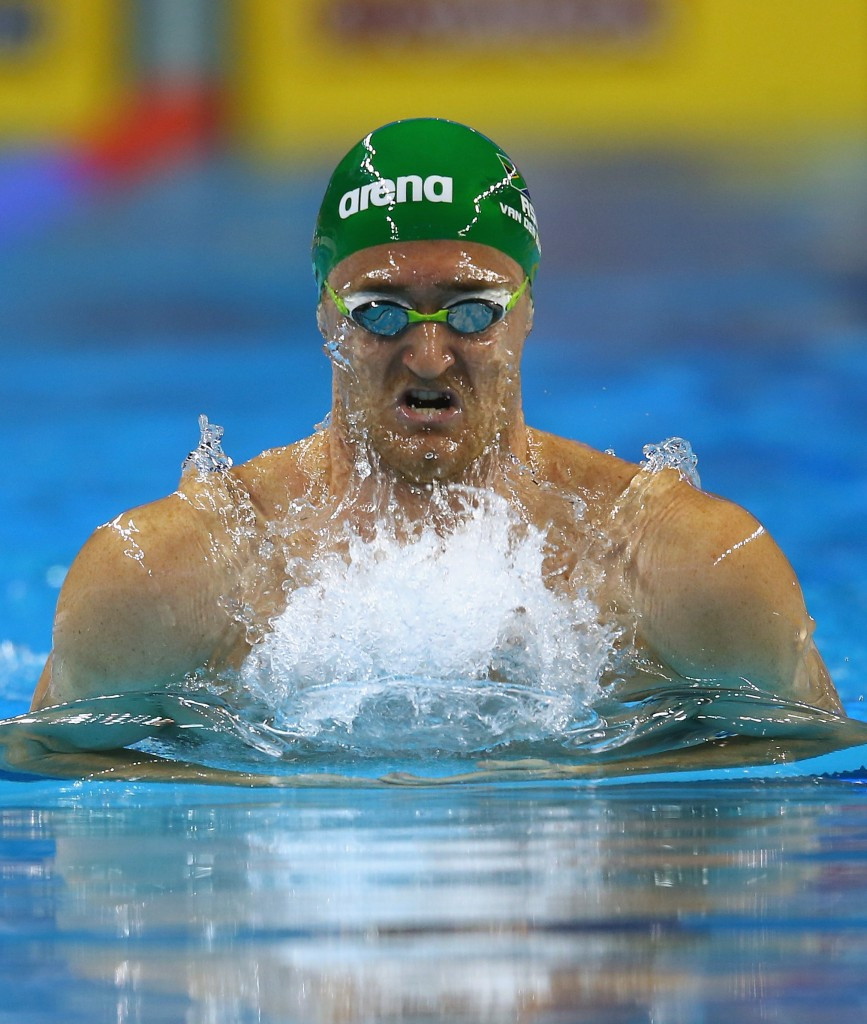 The South African, who leads the men's overall standings, took 100m gold in Qatar's capital in a time of 59.68sec, with the London 2012 Olympic champion in the discipline pushing Hungary's Daniel Gyurta, who clocked 1:00.60, into silver.

Meanwhile, women's World Cup leader Katinka Hosszu added to her medal collection by winning the women's 400m individual medley in a time of 4:36.39 to come home ahead of Japan’s Sakiko Shimizu who was timed as 4:37.95.

American Caitlin Leverenz took the bronze as she finished in 4:39.74.

The Hungarian was timed at 54.40 in the freestyle as gold went to Australia's Melanie Wright, who went one better than her 50m freestyle silver yesterday by finishing in a time of 53.86.

Felicia Lee of the United States did enough for bronze with an effort of 55.22.

In the backstroke, Australia's Emily Seebohm maintained her good form by taking gold in 58.34, with Hosszu finishing second in 59.35.

Natalie Coughlin of the US, a triple Olympic champion, took bronze as she touched to finish in 59.72.

In the men's 200m freestyle, Britain's James Guy doubled up by adding to this 400m success on day one yesterday as he finished in 1:47.06.

He held off Serbian world champion Velimir Stjepanovic who came home in 1:47.56 and Maxime Rooney of the USA who took bronze in 1:48.15.

Olympic 200m butterfly champion Chad le Clos, who swam to a hat-trick of golds on day one, was triumphant in the men's 100m butterfly as the South African touched the wall in 51.44 to beat Tom Shields of the USA who swam 52.10 for silver.

Australia gained another medal as Chris Wright clinched bronze in 52.50.

There was gold for Japan in the men's 200m individual medley thanks to Keita Sunama's time of 2:00.48, with Michael Meyer of South Africa taking silver in 2:01.63 and the bronze going to David Verraszto of Hungary in 2:01.90.

Switzerland bagged a double podium in the women's 50m butterfly with gold going to Alexandra Touretski in 26.81 and compatriot Svenja Stoffel coming in for bronze in 29.96.

Sandwiched in between was American Lee who recorded 26.85 for silver, her second medal.

Jamaica's Alia Atkinson struck gold in the women's 50m breaststroke with a time of 30.55, ahead of American Molly Hannis who swam 31.12 for silver and Australia's Leiston Pickett who came home in 31.13 for bronze.

In the men's 50m backstroke, Australia's Mitch Larkin and American David Plummer shared gold as both were timed as 24.70, with Britain's Liam Tancock taking bronze in 25.65.

Larkin didn't have to share in the men's 200m backstroke though, taking it in 1:53.80, in front of  Japan’s Masaki Kanek who clocked 1:57.83 for silver and Britain's Luke Greenbank who managed bronze in a time of 1:58.38, ahead of le Clos who did not medal this time around.

Zsuzsanna Jakabos won the women's 200m butterfly for Hungary in a time of 2:08.47, ahead of Switzerland's Martina Van Berkel who swam 2:09.59 for silver and American Cassidy Bayer who clocked 2:09.98 for bronze.

Women's 400m freestyle honours went to New Zealander Lauren Boyle, who added to her 800m freestyle gold yesterday in 4:06.58, ahead of Britain’s Jazz Carlin who recorded 4:07.42 for silver and France's Coralie Balmy who took home bronze in 4:07.56.

Brazil's Bruno Fratus marked his first World Cup meet with victory in the men's 50m freestyle, clocking 22.28 to claim gold in front of American Anthony Ervin who was timed at 22.47 and South African Douglas Erasmus who grabbed bronze in 22.50.

Denmark's Rikke Moller Pedersen was the bronze medallist in 2:24.47.

The men's 1500m freestyle had a close finish, with Ukraine's Mykhailo Romanchuk finishing in 15:07.06 for gold, only slightly ahead of Frenchman Damien Joly who was timed at 15:07.97.

Bronze went to Britain, with Stephen Milne recording a time of 15:12.13.