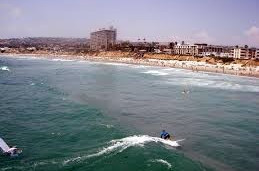 This comes after insidethegames exclusively revealed yesterday that the Californian city was heavily favoured in a five-horse race also consisting of a second United States city in Sarasota, Florida, as well as Dubai, Sochi and an unnamed city in China.

ANOC President Sheikh Ahmad Al Fahad Al Sabah said how San Diego had been proposed as the host during yesterday's Events Working Group meeting, with this decision now having been approved by the wider council.

A vote will still be held during the General Assembly due to conclude on Friday (October 30), but San Diego will be the only candidate put forward.

It therefore appears guaranteed to be formally confirmed as the host.

It was also decided how the Games will take place from September 29 to October 9 in 2017, after the International Olympic Committee (IOC) Session in Lima at which nearby Los Angeles is one of five contenders bidding for the 2024 Olympics and Paralympics.

The news can be interpreted as a continuation of United States' recovering presence in the Olympic Movement, something also illustrated by this week's Assembly here in the US capital.

San Diego gave a detailed presentation during today's meeting, during which they confirmed a budget of $150 million (983,000/€1.4 million) for the Games.

Between 20 and 22 sports are expected to be held, with a final decision to be based on discussions between ANOC and the selected host city.

Skateboarding, surfing and sport climbing - the three youth orientated disciplines also proposed for inclusion at the Tokyo 2020 Olympics - are among those to be proposed, while Esports is also set to be included.

This is predominantly due to the fact Sony USA is based in San Diego.