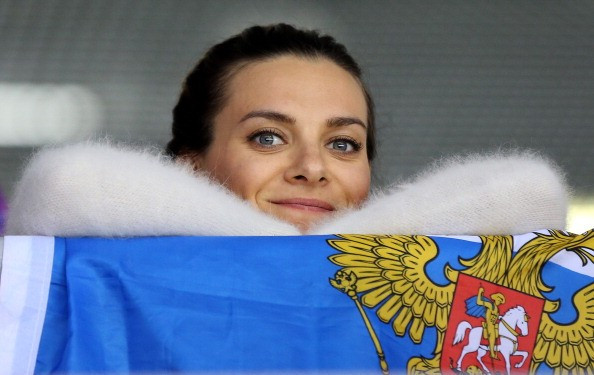 Russian pole vaulter Yelena Isinbayeva is to stand for election to the International Olympic Committee (IOC) Athletes' Commission at Rio 2016, where she hopes to win a third gold medal before retiring from the sport, she has announced.

She is set to be joined on the ballot paper by German fencer Britta Heidemann, winner of three Olympic medals, including gold in the individual épée at Beijing 2008.

The 33-year-old Isinbayeva, widely considered one of the greatest female athletes in history having won Olympic gold medals at Athens 2004 and Beijing 2008, as well as a bronze at London 2012, claimed that becoming an IOC member would mark the next step in her career.

"I knew about that in advance as it was my initiative and my wish," Isinbayeva, who has also won three World Championships titles and set 28 world records, said.

I have been saying many times that I want to work in the IOC.

"I am sure that I can be useful for the Olympic Movement.

"I have rich sport experience that I could share especially with young athletes."

Isinbayeva, a close friend of Russian President Vladimir Putin, was the Mayor of the Athletes' Village at last year's Winter Olympics in Sochi.

Her appointment was controversial, however, after it was reported she supported Russia’s controversial new anti-gay law, although she claimed it was a misunderstanding due to her poor English.

If Isinbayev is successful, she would join Alexander Zhukov, President of the Russian Olympic Committee, as an IOC member.

Zhukov is due to travel here this week for the Association of National Olympic Committees General Assembly.

Another Russian, Vitaly Smirnov, a member of the IOC since 1971, is due to step down at the end of this year after reaching the age-limit of 80.

Russia's former swimmer Alexander Popov, a four-time Olympic gold medallist, will complete his eight-year term as a member of the IOC Athletes' Commission after Rio 2016.

Heidemann, 32, will be bidding to follow in the footsteps of fellow German fencers, Thomas Bach and Claudia Bokel, as an IOC member.

Bokel, who fenced alongside Heidemann when Germany won an Olympic silver medal in the team épée at Athens 2004, is currently chair of the IOC Athletes' Commission and a member of the IOC's ruling Executive Board but is due to step down after Rio 2016 as she will have completed her eight years.

It potentially could leave Germany without an active IOC member at a time Hamburg is bidding to host the 2024 Olympics and Paralympics because, as President, Bach is expected to adopt a neutral stance.

Heidemann, winner of a silver medal in the individual épée at London 2012, speaks fluent Chinese.

Four members are due to be chosen to serve on the IOC Athletes' Commission at elections scheduled to be held during Rio 2016, while another two will be nominated.

The successful candidates will serve eight-year terms and be full IOC members.

Nominations to stand for the IOC Athletes' Commission officially closed on September 15.

The full list of athletes standing is not due to be announced until they have been confirmed by the IOC's ruling Executive Board, so not before the next meeting in Lausanne scheduled for December 8 to 10.

Isinbayeva, who is planning to compete next February for the first time since 2013 after giving birth to a girl in June 2014, and Heidemann join two other Olympic champions whose candidatures have become public already.

Japan's Koji Murofushi, a gold medallist in the hammer at Athens 2004, is also planning to stand again.

Murofushi, now the sports director at Tokyo 2020, topped the ballot for the IOC Athletes' Commission at London 2012 but was controversially disqualified for breaching strict rules governing campaigning during the election, allegedly giving gifts, putting up posters and lobbying in the athletes' dining hall.

Besides Bokel and Popov, four other athletes will finish their terms of office during next summer's Olympics in Rio de Janeiro, including South Korea's Dae Sung Moon, who is still supposedly under investigation by the IOC Ethics Commission for plagiarising his doctoral thesis.

Also departing will be Cuba's Yumilka Luaces and New Zealand's Barbara Kendall, as well as Guatemala's Pedro Yang, one of three nominated members on the panel who is not a member of the IOC.

The 15 full members of the Commission are all elected for eight-year terms, with the most recent additions being Norwegian biathlete Ole Einar Bjørndalen and Canadian ice hockey player Hayley Wickenheiser at Sochi 2014.

Bjørndalen has missed both IOC Sessions since his election, and has been given special dispensation by Bach to be excused from his IOC duties and to focus on the final year of his sporting career, after which he is expected to make himself "fully available".