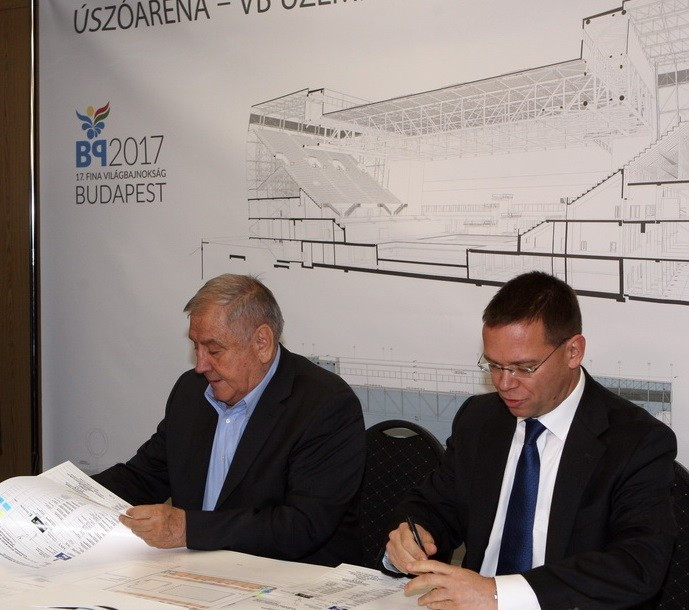 The delegation singled out the construction of the new swimming complex, currently being built in the Hungarian capital, for particular praise as work on the venue only began in May.

Two 27 metres high towers and the swimming pool walls have already been constructed though a specific time-frame for the completion of the facility is yet to be revealed.

FINA officials met with representatives from the Organising Committee for the 2017 World Championships, due to take place from July 15 to 30, during the visit.

Competition in swimming, water polo and diving will be held at the city’s famous Margaret Island pools while Lake Balaton, a major tourist destination in Hungary, will host the open water event.

Batthyány Square, located opposite the Hungarian Parliament, will be the picturesque setting for the high diving events, it has also been revealed, while the city will also host the the 2017 FINA Masters World Championships between August 1 and 12.

Budapest stepped in to stage the Championships after original host, Mexican city Guadalajara, pulled out due to fears over falling oil prices earlier this year.

The city was due to stage the 2021 edition and a new bidding process for that event has been opened with the event now due in Hungary four years earlier than originally planned.

“We had many meetings with the people who run this project and I can tell you that we managed to agree on every little detail,” Marculescu said.

“FINA is really proud that Budapest will have such a fantastic legacy after the 17th FINA World Championships.”

Budapest mayor István Tarlós, who gave his full backing to the city’s bid to host the 2024 Olympics and Paralympic Games before they officially entered the race in July, welcomed the delegation from swimming’s world governing body, vowing to stage the best-ever edition of the event.

Hosting aquatics’ biennial flagship event will give Budapest the chance to stake their credentials mere weeks before the International Olympic Committee elect their chosen host of the Games in 2024 at its Session in September 2017 in the Peruvian capital Lima.

Hamburg, Los Angeles, Paris and Rome are also in the race for the Games.