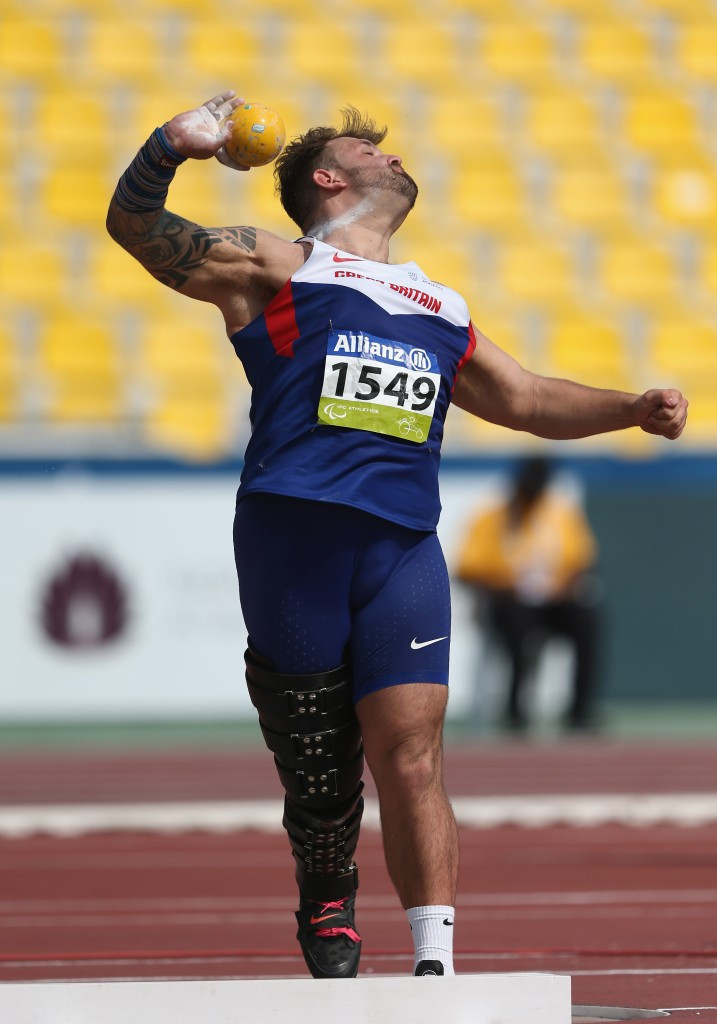 Britain’s Aled Davies claimed the first title at the IPC Athletics World Championships in Doha after producing a Championship record throw of 14.95 metres in the men’s F42 shot put event to successfully defend the crown he won two years ago in Lyon, France.

Despite his triumph, Davies revealed that he wasn't impressed with his display at the Qatar Sports Club as the event got underway today.

“It’s probably not the performance I wanted, but I came here and won a major title and that’s what matters at the end of the day,” said Davies, who received his medal from IPC President Sir Philip Craven.

“I know I didn’t perform as well as I could have, but I got the gold medal and that’s what it’s all about.”

Iran’s Sajad Mohammadian had led earlier in the competition but would be forced to settle for silver with a throw of 14.54m, while Germany’s Frank Tinnemeier won bronze with an effort of 14.33m.

Field events continued to be the main focus of the early action with Cuba’s Leonardo Diaz retaining his title in the men’s F56 discus after producing a throw of 45.10m to edge out Iran’s Ali Mohammadyari, who took silver having achieved a distance of 44.97m.

Sweden’s Per Jonsson earned the fifth title of the morning after leaping 7.15m to win the men’s T13 long jump ahead of Spain’s Ivan can Blanco and Uzbekistan’s Bekjon Chevarov, who achieved distances of 6.75m and 6.65m respectively to secure podium positions.

The evening session saw Germany’s Vanessa Low break the world record on two occasions to claim the women's T42 long jump title ahead of her rival Martina Caironi, with her effort of 4.79m proving enough to beat the Italian, who managed a distance of 4.59m.

Britain secured a further hat-trick of titles with Kadeena Cox leading their gold rush as she backed up her world record time of 13.59sec in the morning's T37 100m heats to win gold in a time of 13.60, ahead of her team-mate Georgina Hermitage, who crossed the line in 13.87.

Cox's triumph was quickly followed by Hannah Cockroft successfully defending her women's T34 100m title in a Championship record time of 17.73, before compatriot Sophie Hahn lowered her own world record in the T38 event to win gold in 12.60, with China's Junfei Chen taking silver in 12.97.

The first day of competition followed on from yesterday’s Opening Ceremony which took place at the Katara Cultural Village and featured a performance displaying the history of Qatar, as well as the development of the Paralympic movement worldwide.