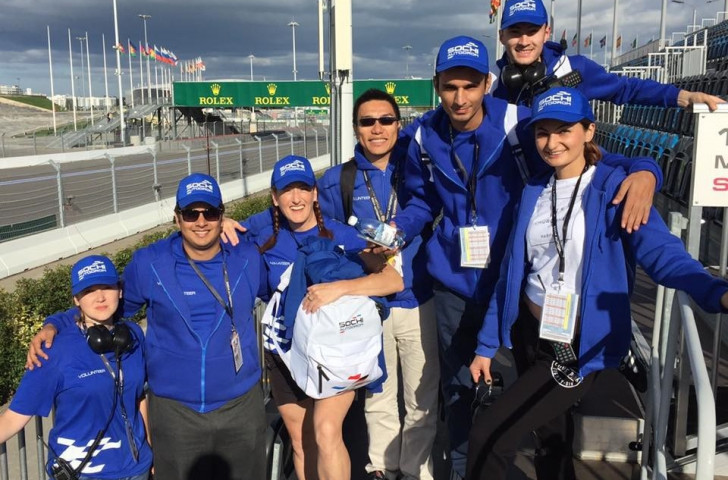 From October 8 to 11, students on the third edition of the course observed and assisted the Organising Committee in a wide variety of operational fields, including accommodation, fan experience, branding, transportation and safety, as well as working with volunteers and the media.

Additionally, students were able to visit venues at the Sochi Autodrom street circuit and receive presentations from key officials.

As part of their specially-designed programme, students also kept diaries to critically evaluate their participation in the event.

As a follow-up, students will use their diaries to produce a report summarising their experiences.

"The level of interaction which our students had with Organising Committee members during their observation programme with the Russian Grand Prix allowed them to better understand the scale of operations that high-profile events involve," said RIOU Rector Professor Lev Belousov.

"This is the second time RIOU students have participated in placements with the Russian Grand Prix and the practical experience they gain from it is invaluable.

"RIOU prides itself on the balance we provide between teaching in-depth sports management theory and providing hard-earned real-world experience."

During the recent International Wheelchair and Amputee Sports Federation (IWAS) World Games, which took place in Sochi from September 26 to October 2, RIOU students were involved in a range of operations as part of the first of two placement programmes within a month of their course beginning.

As well as assisting the teams and delegations, they also aided the classification commissions, Games judges and representatives of the Russian Anti-Doping Agency (RUSADA).

This hands-on experience is said to have given RIOU students a better understanding of the specific needs of a multi-sport event and managing athletes with an impairment.

The RIOU students' contributions to the Games were recognised by Russia's Ministry of Sport and IWAS, while Russian Sports Minister Vitaly Mutko met up with them.

"It is testament to the excellent sports industry links which RIOU has that two weeks earlier our students were helping to deliver the International Wheelchair and Amputee Sports World Games, which provide a markedly different set of operations for our students to observe," added Belousov.

The IWAS World Games is a biennial event with competitions in athletics, swimming, archery, table tennis, arm wrestling and Para-taekwondo.

This year’s edition of the Games brought together 800 athletes representing 34 countries.