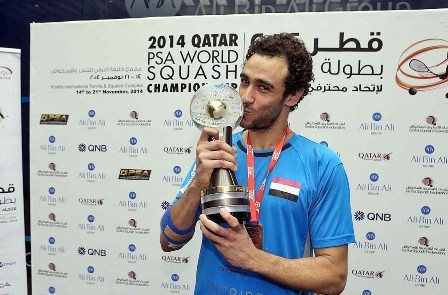 Next month's Professional Squash Association (PSA) Men's World Championships will be the most globally diverse event in history, organisers have claimed, after each of the world's top 40 players confirmed their entries.

Taking place on American soil for the first time, in Bellevue, Seattle from November 13 to 22, 112 of the world's best players spanning 32 countries and six continents are due to compete in what is billed as the "most prestigious title in the world of squash".

It will be a key opportunity for the sport to showcase itself following its failure to be nominated for inclusion at the Tokyo 2020 Olympics, a major disappointment for the worldwide community.

Egypt's defending champion and three-time winner Ramy Ashour will be aiming to retain the title he won in dramatic fashion in 2014 but will line-up as only the fourth seed in the 64-man main draw.

Leading the way will be his compatriot, and the man Ashour beat to claim his last two titles, Mohamed Elshorbagy, the world number one attempting to win a first career global crown.

Three-time winner Nick Matthew of England and four-time runner-up Gregory Gaultier of France are other leading seeds ahead of a draw a week today on October 20.

“We’re very excited to host the 2015 Men’s World Championship in Bellevue this year and are delighted with the strength and depth of squash talent that have committed to playing in the sport’s most prestigious event,” said tournament promoter Shabana Khan.

“Bellevue has a blossoming squash scene and a deep-rooted connection with the history of the sport and to be the first city in the United States to host the World Championship is a great honour for everyone involved in the sport in the area.

"We’re really looking forward to welcoming the world’s best players to the city in November.”

Tickets for the 2015 Men’s World Championship are available to purchase now by visiting the official website here.