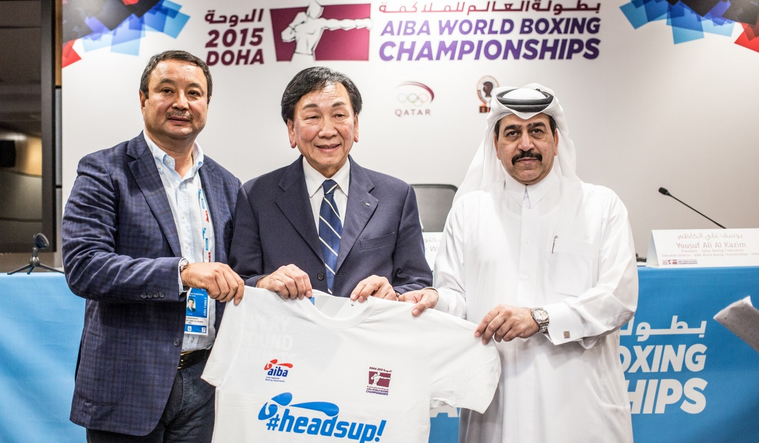 International Boxing Association (AIBA) President C K Wu has announced the details of "HeadsUp!", which he claimed is a new integrated initiative designed to help nurture boxing careers more than ever before.

Based upon the four pillars of health, education, sport and sustainability, AIBA has begun the campaign with a focus on training boxers to maintain a heads-up stance to help prevent concussions and cuts.

The AIBA Medical Commission has been working behind the scenes at boxing competitions throughout this year, concluding with a series of HeadsUp! workshops with World Championship referees here in Qatar’s capital to help them anticipate issues before they occur and to warn boxers leading with the head.

The training of coaches will also be part of the ongoing education of the boxers in a bid to ensure that they go into bouts, not only with the correct stance, but the right mind-set to ultimately change the behaviour of leading with the head that came with the psychological protection of guards.

In 2012, AIBA’s Executive Committee unanimously passed the motion to end the use of headguards in all of their elite men's competitions on the back of the Medical Commission’s study of 11,000 AIBA bouts around the world.

The following year's World Championships in Almaty, the first not to feature headguards in three decades, showed a decrease in the number of concussions compared to the 2011 competition in Baku, it is claimed.

"It is essential that AIBA fulfils its duty to provide a strong, secure framework within which boxers can develop and excel from grassroots to pro competition," said Wu.

"HeadsUp! will now be adopted by the world’s boxing federations to help all of our athletes enjoy stable futures in their sport."

To maintain the improvements, bringing a change in training methods to literally keep boxers' heads raised during bouts was imperative, AIBA claimed.

"Since being introduced in 1984, headguards have brought a psychological as well as physical cushion that has led to a passive style of boxing," said Dr Khadri, chairman of the AIBA Medical Commission.

"We need to teach the correct way to box with a better stance - heads up - and that requires ongoing education of boxers and referees."

During his visit to the World Championships here, Asian Boxing Confederation President Serik Konakbayev became the first to sign the HeadsUp! charter, which is set to be shared with all 196 National Federations around the world.

Headguards have been worn by boxers at every edition of the Olympics since the 1984 Games in Los Angeles, however, they are set to be scrapped for Rio 2016.

Whether they do is expected to be a lot clearer after these World Championships where observers from the International Olympic Committee (IOC)’s medical department, as well as AIBA’s Medical and Scientific Commissions, are on hand to study the action.

"I think removing headguards is a very important decision for the future of our sport, but we made this decision because we’re confident that we have a lot of data supporting this decision," added Wu.

"And now coming to these World Championships with joint working groups, the aim is to prove even further that removing headguards is best for the sport.

"As International Federations, we set up our rules.

"We set up these rules because we have something to base them on.

"It's not just imagination - that isn't a responsible decision.

"We made a very responsible decision and we’re continuing to collect the data to prove it’s sustainable."


Related stories
September 2014: World Championships will help decide whether Rio 2016 features first men’s Olympic boxing competition without headguards for 36 years
October 2014: No concussions at Asian Games vindicates scrapping of headguards, claims AIBA
August 2014: Headguards will not be reintroduced despite Glasgow 2014 problems, warn AIBA
July 2014: AIBA to assess use of headguards after Australian boxer forced out of Glasgow 2014 by injury
July 2013: Boxing head guards to be scrapped by Rio 2016