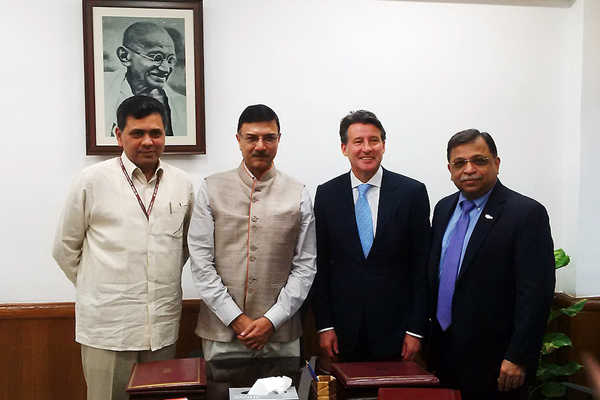 Sebastian Coe, in India as part of his first official visit to a member country since assuming the Presidency of the International Association of Athletics Federations (IAAF) last month, has backed the idea of an athletics league in the style of cricket's Indian Premier League (IPL) where athletes such as Usain Bolt and David Rudisha could represent some of the world's major cities.

Coe believes the global interest created by athletics as a team sport would help it survive the "high-class problem" of its number one asset Bolt eventually going into retirement.

“I want to see an inter-city competition,” the double Olympic 1,500 metre champion told reporters during a visit to New Delhi today, where he signed an expression of intent for the establishment of a national centre of excellence for athletics at the Jawahar Lal Nehru Stadium which hosted the sport during the 2010 Commonwealth Games.

“I want to see the big global cities of the world competing against each other.

India has revolutionised franchise sport with the introduction of the IPL, which has attracted the world's best players into a huge money-spinning Twenty20 league.

Coe indicated he would like to repeat the success in athletics but on a worldwide scale.

'You have a fixed budget,” he said.

"If Paris think they want Rudisha and someone else, that's fine.

“I think we need to be innovative.”

Coe's incipient Presidency has been dominated by the drugs issues blighting the sport but he told Times of India he also had to look forward to securing the sport post-Bolt.

“When he leaves, it is a high-class problem, not a crisis," he said.

"This is a similar conversation that happened in the 1960s - where will boxing go once Muhammad Ali goes?

“I don't think there has been an athlete after Ali that has captured people's imagination as Usain Bolt has.

“Will our sport survive it?

"Yes, but we need to work even harder, we are competing against a lot of sports.

“When we started to bid for London [the 2012 Olympics], I went to schools and children said they wanted to be David Beckham or Roger Federer.

“Nobody talked about being an athlete, but after London, people said they wanted to be Bolt.

Coe, who on Monday attended the Executive Committee meeting of the Athletics Federation of India on his two-day visit to the  country, said India should have "ambitions" to achieve success at the Olympics.

Flanked by Athletics Federation of India (AFI) President Adille Sumariwalla, who became a member of the IAAF Council recently, Coe said at a press conference following his signing of the expression of intent that India will have to work to attract corporate sponsorships to raise the profile of the sport in the country.

"An Indian Athletics League seems interesting if you have sponsors coming," said Coe.

"Some of the world's biggest multinational corporations are in India and you need to engage with them.

"You have to have sponsorships, have regional championships and work to bring big events.

"You need to strengthen the competition structure."

Coe also attended the South Asian Federation Athletics Council meeting on Monday, reflecting on both occasions upon the vast opportunities for development and growth in the region.

He pointed out that with Asia home to six of the world’s 10 fastest growing economies and 60 per cent of the world’s youth population between 15 and 24, the challenge was to build a youth fan base for athletics to attract an increasingly affluent Asian public.

Coe confirmed that the IAAF, as well as empowering and working with its area and national member federations to support tailored development, needed to work with them to maximise commercial opportunities.

He also described his visit to India as an emotional one.

"It is my first official visit to a member Federation," he said, after last visiting the country in 2010.

"For me it is an emotional visit, my grandfather was an Indian and my mother was born in Delhi.

"I wanted to visit India in memory of her.

"I am delighted to be here."