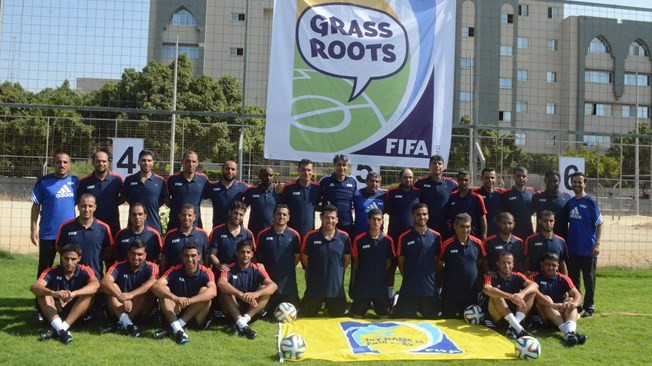 The Moroccan supervised the participants during the five-day course, held at the Islamic University of Gaza’s stadium, comprising of both practical and theoretical training in the areas of football coaching and organisation.

It is hoped that as a result of the additional training the participants will be able to run self-sufficent grassroots football projects in co-operation with the Palestinian Football Association (PFA).

"We have found a very talented group of youth coaches," said Lahrache, following the completion of the course.

"We see this course as an initial pillar to empower the participants to promote grassroots activities within their communities and bring more children into football."

The final day saw a grassroots festival take place with the participation of children from Gaza bringing the course to a conclusion, marking the first time such an event has taken place since the PFA became affiliated to FIFA in 1998.

FIFA are now set to organise a follow-up course in the city of Ramallah between October 17 and 22, as part of their global approach to developing grassroots football in the region, which has been subject to sustained conflict.

The governing body had made a pledge to provide $1 million (£660,000/€840,000) of support to help rebuild football facilities that were destroyed during the recent conflict, through solidarity funding.

Funding was approved in January to help the PFA to build 20 mini pitches in different municipalities of the Gaza Strip, while grassroots football courses and sending instructors to the region was also agreed to help support the development of players in the country.

"This activity represents a major step in our efforts to promote football at grassroots level and develop a new generation of talented players," he said.

Palestine made their debut at the Asian Cup earlier this year, having won the 2014 Asian Football Confederation Challenge Cup, however they were unable to make it past the group stage in Australia, with the hosts eventually winning the tournament.