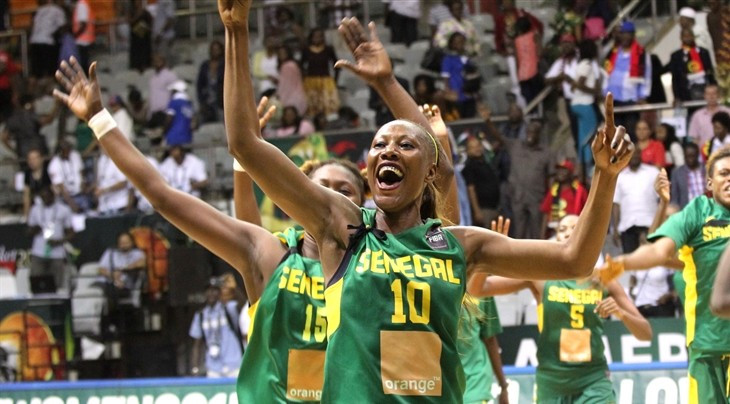 Ten-times champions Senegal ended Angola’s Women’s AfroBasket title defence with a slender 56-54 victory on a dramatic day at the event in Yaounde, Cameroon.

The Senegalese side led for the majority of proceedings but squandered a 15-point advantage, allowing Angola to square the contest at 54-all with just 30 seconds left to play.

But despite that setback, they were able to edge over the winning line late on thanks to two free-throws from Astou Traore to secure their spot in the final against the host nation tomorrow.

Traore was the star of the Senegalese show as she demonstrated her desire for her first Women’s AfroBasket crown with a haul of 17 points, though Angola’s Nadir Manuel was the game’s top scorer with 19.

Her impressive tally proved to be in vein however as Angola’s pursuit of an historic third straight title came to a disappointing conclusion.

The defending champions were on the back foot from the outset as Senegal started the better of the two sides and managed to establish a telling 35-24 advantage by half-time.

That seemed to deflate Angola, who have won two of the previous three editions of the tournament, but they gradually began to haul themselves back into contention, seemingly taking advantage of a sluggish period from Senegal.

As the match veered towards its climax, Angola dramatically drew level before Traore stepped up to seal victory for Senegal, giving them the chance of earning an 11th Women’s AfroBasket gold.

They face a tough task if they are to return to the summit of women’s African basketball as they will go up against Cameroon in the final after the home nation edged Nigeria 71-70 in a thrilling contest in front of a packed home crowd.

The Cameroonian side came into the encounter as the tournament’s only unbeaten side and they were able to hold off the stern challenge presented by Nigeria, who won the event in 2003 and again in 2005.

Amina Njonkou and Ramses Lonlack, so often the focal point of the Cameroon team, combined for 34 points while Nigeria’s Adaora Elonu claimed an individual haul of 17.

The topsy-turvy match provided thrilling entertainment as the momentum continually changed but it was the hosts who held their nerve late on to seal a place in the Women’s AfroBasket final for the first time.

In the classification matches for fifth to eighth place, Mozambique landed a stunning 17 three-pointers in their 99-76 success over Egypt, while Mali beat Gabon 71-52, and the two sides will do battle for fifth tomorrow.

Guinea finished ninth thanks to a slender 53-52 triumph over Uganda and Algeria secured 11th place with a comfortable 87-49 win against South Africa.