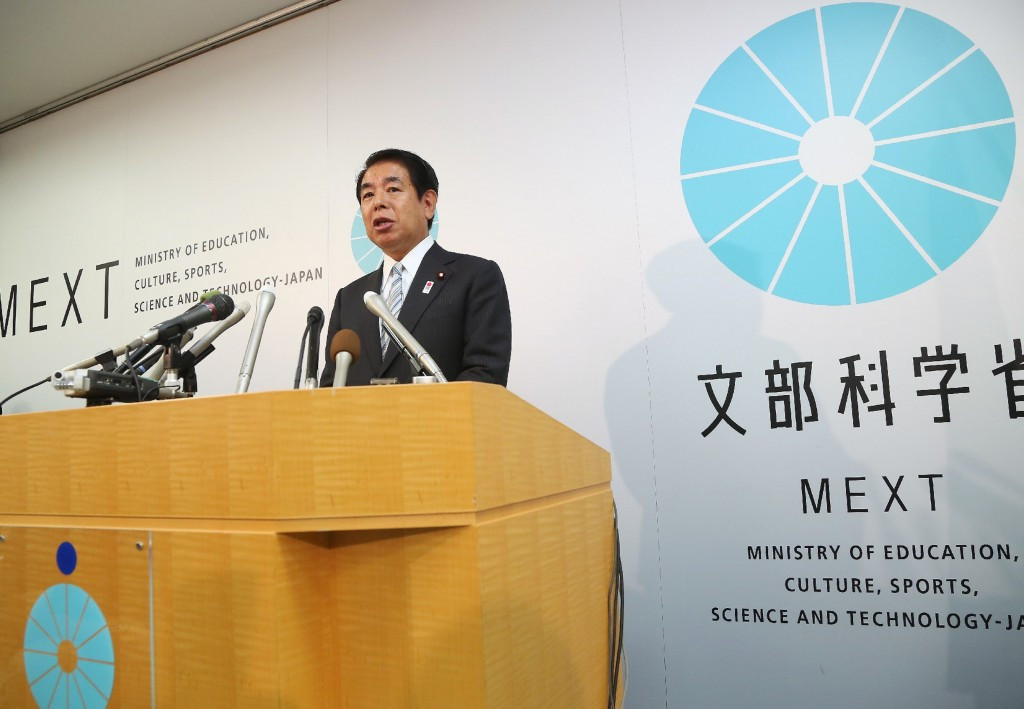 This follows the completion of a report into what went wrong, which, according to local media, has blamed the decision-making on Shimomura's Ministry as well as on the Japan Sports Council, a state-run body overseeing the project, and the Organising Committee itself, headed by former Prime Minister Yoshiro Mori.

A hunt is now underway for a replacement design and contractor, with fears remaining that it will not be ready either in time for the Olympics in 2020, or for the previous Autumn's Rugby World Cup.

Shimomura, head of a Ministry covering Education, Science and Technology as well as Sport, confirmed after a Cabinet meeting today that he had offered his resignation, adding how "it is true that this has caused much concern and inconvenience".

According to Kyodo News Agency, he will return half his pay for the last six months in atonement for his failures.

"I have caused great worry and trouble to many of the people over the National Stadium problem," the 61-year-old added.

The Liberal Democrat Party member assumed office at the same time as Abe was elected Prime Minister in 2012 and was the main Government Minister responsible for Olympic preparations until Toshiaki Endo was appointed Olympic Minister in June of this year.

Abe, recently re-elected head of the ruling party, has requested that Shimomura remains in his post until a Cabinet reshuffle which is expected to be held later this month.

A revised budget of JPY ¥155 billion (£800 million/€1.1 billion/$1.3 billion) has been unveiled by the Government for the Stadium, with a design scheduled to be confirmed in November.

The IOC have set a deadline of January 2020 for the completion of the stadium, which organisers are hoping to fulfill, although March has been put forward as a final deadline.

But the situation has been further criticised, with Zaha Hadid, the Anglo-Iranian architect whose firm designed the scrapped stadium and were still hoping to design revised plans, describing it as a "scandal".

The company withdrew from the process earlier this month due to being unable to find a contractor.

Speaking to the BBC in a wide-ranging but heated interview which she cut short soon after beginning speaking about the Stadium, the 64-year-old insisted it was a "scandal" because her company "won this competition almost three years ago".

They allegedly warned the Japanese early in the process that costs could be higher than anticipated due to huge inflation in the Japanese contruction market, as well as other mitigating factors, she said.

Hadid added: "It was an international competition entered by many Japanese architects and we won it.

"The head of the jury was Tadao Ando who is a very well known architect and a very serious architect in Japan with other jurors from Britain, Lord Rogers, Lord Foster and so on.

"So we won this competition, they awarded this project, we worked on it, we are partners with a Japanese company."