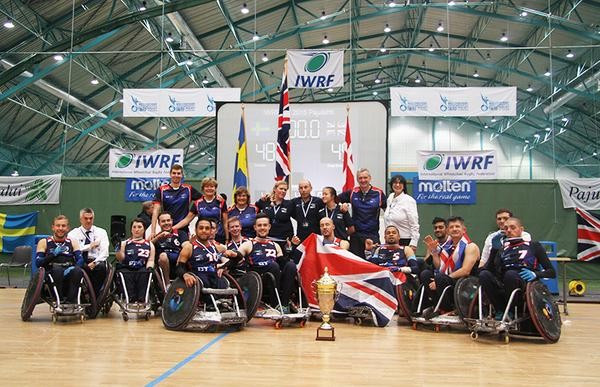 Britain claimed gold at the European Wheelchair Rugby Championships as they came from behind to beat Sweden 49-48 in a tense final in Finland.

Both sides headed into the match assured of places at the Rio 2016 Paralympics after overcoming Denmark and Germany in their respective semi-finals, but they were both aiming to secure gold to cap their excellent displays at the tournament.

The Swedish team were bidding to secure their third consecutive title, having triumphed at the 2011 and 2013 editions of the biennial event, and their prospects looked good after they moved into a 25-24 lead at half-time.

However,  the British team were showing why they were considered one of the pre-tournament favourites as they prevented their rivals from edging further ahead and they kept alive their hopes of leaving Finland with an unbeaten record and gold medals around their necks.

They would achieve that aim as they battled back in the closing stages and when the buzzer sounded at the end of the fourth and final quarter, they had earned a narrow 49-48 margin of victory to bring Sweden’s domination of the competition to an end.

The battle for the bronze medal looked like it was also going to be decided by the narrowest of margins, with Denmark leading Germany 26-25 at the halfway mark in the contest.

However,  the Danish team were able to pull away from their rivals in the final two eight-minute quarters to end the match as comfortable 56-48 victors.

Having avoided relegation to Division B of the European Championships yesterday both France and Ireland could play without fear in the fifth and sixth place classification match.

Ireland, who had already secured their best ever finish at the Championships, trailed by two points at half-time and were unable to work their way back into the encounter with France eventually securing a 63-54 win.

Meanwhile,  earlier in the day Finland had managed to end their tournament on a high after the earned their first win in front of their own fans by beating a Belgian side, who will fly home without a win to their credit, in the seventh and eighth place match.

Both teams had already been relegated but it was the Finns who were able to restore some pride as they ended the contest as 50-46 winners.