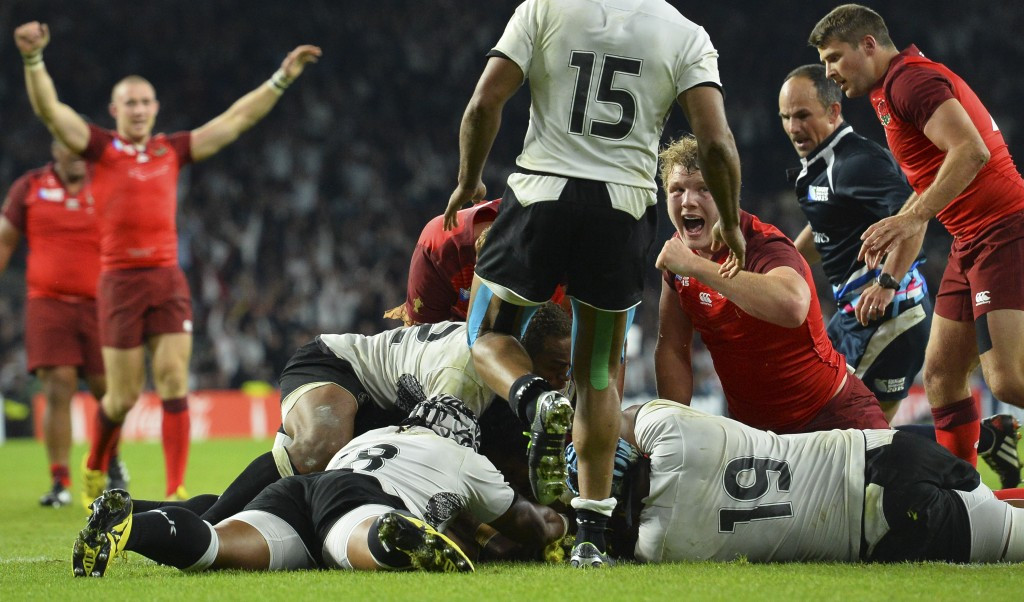 With the clock ticked past the 80 minute mark, the Saracens man touched down an arm to ensure maximum points for Stuart Lancaster's men but for much of the evening it was far from convincing.

Perhaps it was the opening night tension at being the host nation when a country expects, but England made heavy weather of a determined Fiji side who, had it not been for missed kicks, would have made things even more uncomfortable for the 2003 champions.

With fellow powerhouses Wales and Australia in Pool A, the so called group of death, England know they will need to be far better to reach the knock-out stages.

But in the end a win is a win and Billy Vunipola's try, added to Mike Brown's double and a penalty try, ensured that they scored the four tries needed for a bonus point which in the end could prove to be more than crucial.

Fiji, for their part, proved at times that they have the potential to be more than a thorn in the side of the more established nations.

After a riveting opening ceremony which featured a giant rugby ball in the middle of the turf and words from Prince Harry, a cauldron of noise greeted both teams at Rugby HQ.

Perhaps the nerves got to the Fijians as inside two minutes their scrum collapsed, allowing fly-half George Ford the chance to boot over a penalty for England’s first points of the tournament.

He successfully dissected the posts for an early 3-0 lead but Ben Volavola had an immediate chance to level for Fiji with a penalty of his own – an opportunity which he spurned from out wide as the ball struck the posts and bounced down on the wrong side.

The first try of the World Cup duly arrived after 12 minutes and came in the form of a penalty try.

England demonstrated sublime pace and power to barge their pack forward before they were held up on the line, illegally according to ref Jaco Peyer.

Ford added the conversion for a 10-0 lead and there was a double blow for Fiji as Nikola Matawalu was sin-binned for his part in the infringement.

Lancaster’s side were happy to take advantage but their second try came from another Fiji mistake as Geoff Parling intercepted a lineout, allowing the ball to be swept out wide for Brown to eventually crash over.

Ford dragged a tricky wide kick past the far side of the posts and when Fiji returned to a full complement of players it looked as if they had secured their first try.

The ball popped loose from a scrum and Nikola Matawalu collected it, motored away and dotted down under the close attention of two England players.

A try was awarded but the Pacific Islanders’ score was to remain at zero as the televised match official (TMO) revealed Matawalu had knocked-on.

They didn’t have to wait long to etch their name on the scoreboard though as from the resulting pressure, Nemani Nadolo fell down on a lofted kick and the TMO this time ruled in their favour.

The conversion was missed to leave England 15-5 to the good and Ford quickly gave his side more breathing room by punishing a Fiji offside with another penalty.

Fiji responded in kind as Parling was penalised for not rolling away and Nadolo slotted through the posts.

On the stroke of half-time, Ford attempted another penalty which didn’t have the legs to reach the sticks and the hosts’ lead was 18-8 at the break.

Nadolo started the second half by wasting another kicking chance for Fiji with a penalty attempt which dropped short.

He was wayward again on the hour mark as England struggled to find any potency but when Fiji were handed another penalty chance in front of the posts shortly afterwards, Volavola made no mistake to bring his side within a converted try.

Replacement fly-half Owen Farrell was grateful for an easy penalty to restore England’s breathing room and there was a collective sigh of relief when Brown juggled with the ball temporarily on the line before touching down for the third try on 71 minutes.

Farrell added the extras for a 28-11 lead and that provided the hosts with a renewed spark to set up the late drama.

After a long wait for the TMO Vunipola's try was given and Farrell converted.

England had their ideal start, but were far from their fluent and free-flowing best and they will need to do better.

Related stories
September 2015: The World Cup and then a return to the Olympics - this could be the greatest period rugby has ever known
September 2015: Mike Rowbottom: Rio 2016 awaits rugby sevens, Campese's farewell format, as England prepare for World Cup launch