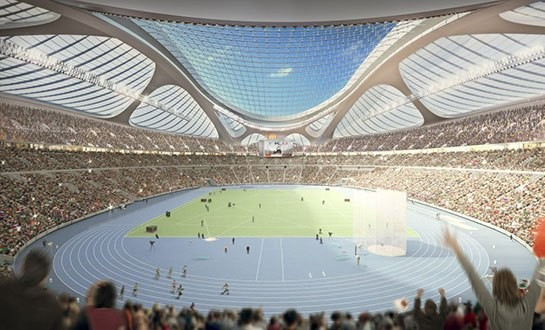 Zaha Hadid Architects and Japanese company Nikken Sekkei have pulled out of the race for the contract for the Tokyo 2020 National Stadium, it has been announced, citing a lack of a construction company as their reason for their withdrawal.

The two firms had teamed up to form updated plans to design the Tokyo Stadium after their initial idea was scrapped in July.

But they were unable to secure a construction firm to build the Stadium, which was one of the main requirements if they were to be awarded the contract, and have subsequently decided to remove themselves from contention.

The news provides a further blow to Tokyo 2020 as the venue, which was due to be used for the 2019 Rugby World Cup in Japan, remains a serious concern for the International Olympic Committee (IOC), with fears over readiness continually proving a thorn in their side.

“Nikken Sekkei has proceeded with its preparations to team up with Zaha Hadid Architects for developing a proposal for the New National Stadium design and build Competition,” a Nikken Sekkei statement read after a deadline for entries expired today.

“Nikken Sekkei and Zaha Hadid Architects have not been able to secure a construction company in their consortium and therefore announce that they are unable to enter the competition.”

The news comes after Zaha Hadid had warned that the "flawed"  competition process for the National Stadium could cause a “lower-quality” venue to be built which may cost “much more than anticipated”.

They claimed the process has “restricted the existing design team, as well as many other Japanese and international architects that may wish to take part, from entering the new competition without a construction contractor".

Zaha Hadid have, however, vowed to continue with their plans should the bidding process be revised.

“It is disappointing that the two years of work and investment in the existing design for a new National Stadium for Japan cannot be further developed to meet the new brief through the new design competition,” they said in a statement.

“Nikken Sekkei and ZHA are prepared and able to deliver a cost-effective Stadium that meets the revised brief, is ready in good time for the 2020 Games and provides a new home for sport in Japan for generations to come.

“While the current competition is closed to the existing design team we stand ready to use the wealth of detailed knowledge and expertise, built up through the thousands of hours dedicated to the project, to assist the National and Tokyo Governments and Japanese people to deliver a Stadium fit to welcome the world in 2020 and go on to host national, international and community events for the next 50-100 years.”

Japanese Prime Minister Shinzō Abe scrapped the original plan for the Stadium last month, due to be built on the site of the arena used for the 1964 Olympics, in the face of public criticism after its costs rose to ¥252 billion (£1.3 billion/$2 billion/€1.8 billion), nearly twice original estimates.

The Japanese Government announced a revised budget of JPY ¥155 billion (£800 million/€1.1 billion/$1.3 billion) but concerns still remain over whether a suitable venue can be constructed in the relatively short time-frame.

The IOC had set a deadline of January 2020 for the completion of the stadium and the timeline remains tight, although Zaha Hadid had claimed they would be able to get it ready in time for the Rugby World Cup in four years’ time.