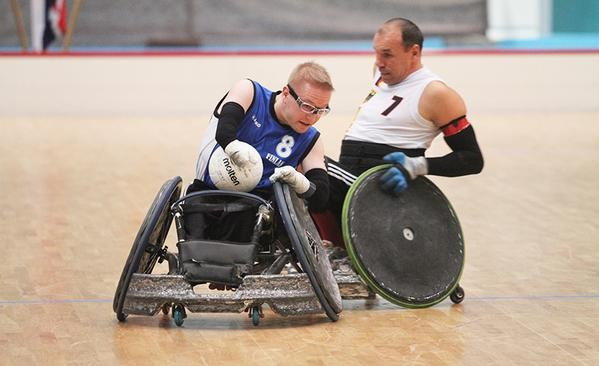 Germany reached the semi-finals of the European Wheelchair Rugby Championships after overcoming the host nation Finland in their final Group B match in Nastola today.

The German team headed into the game knowing that a win over Finland would guarantee them a spot in the last four of the competition, due to having a better head-to-head record than their rivals Ireland.

In the end, they started the match virtually assured of a semi-final berth due to the Irish falling to defeat to the group winners Denmark in the earlier game.

However, they were coming up against a team determined to claim their first win of the tournament in front of their home crowd and the Finns kept close to their opponents, only trailing by four points at half-time, with the score reading 28-24 to Germany.

An extremely entertaining affair continued in the final two eight-minute quarters but it would prove to be disappointment in the end for the host nation as they would end bottom of the group, with no victories, as they fell to a 58-50 defeat.

Ireland knew they needed a victory and for the result later in the day to go in their favour but their hopes suffered a blow as they trailed Denmark 29-26 at the halfway mark.

The Danes then showed their class in the closing quarters as they began to score regularly and ended with a comfortable 67-44 margin of victory.

In Group A the British team booked their spot in the last four after they outplayed Belgium.

They quickly swept into a 26-16 advantage at the halfway mark and continued to pull away from their opponents to earn a 57-33 win.

The result also confirmed that the defending champions Sweden would appear in the semi-finals after they had secured a 57-48 win over France in their penultimate match of the group phase.

Britain would emerge as the group winners after beating Sweden in the final match ahead of the knock-out phase of the tournament.

Having worked their way into a commanding 32-23 lead by the break the British team seemed determined to send out a statement of intent to their rivals in the knock-out phase as they finished with a with margin of 63-47, with Jim Roberts and Ayaz Bhuta scoring 18 points each.

Britain will now face Germany in their last four match, while the defending champions Sweden take on the unbeaten Danes.