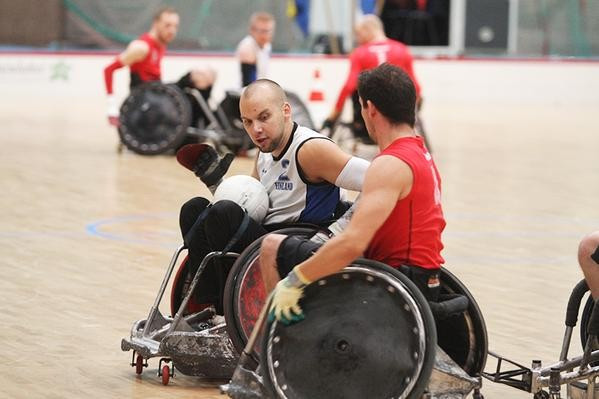 Denmark delivered a masterclass on the second day of the European Wheelchair Rugby Championships as they cruised past the host nation Finland in Nastola.

Having been narrowly beaten by Ireland in their opening game at the Pajulahti Sports Institute, the Finnish team were looking for their first points of the tournament but quickly found themselves on the end of some excellent Danish play.

After securing a well-earned 28-20 half-time lead, Denmark began to pull away from their opposition in the final two eight-minute quarters to finish the match with a 62-37 margin of victory, which sees them top Group B following Ireland’s defeat to Germany.

The opening two quarters saw little between the Irish and German sides, with the latter, who lost their opening game against Denmark, holding a 32-28 lead at the interval.

Germany’s four-point advantage would also prove to be the difference between the two teams at the close of the game with the scores having moved on to 62-58, meaning that Ireland have now one win and one defeat to their name in the four team group.

The result also carried huge significance in the Group B table as Germany climbed above Ireland into second place, due to their head-to-head record.

Group A’s opening matches took place today with Great Britain’s clash with France gaining most of the attention, with the two teams considered among the favourites for the tournament.

France headed into the clash buoyed by a 54-45 victory over Belgium in the day’s early game but Britain responded to the pressure of needing a win over their rivals to keep hopes of topping the group alive, as they moved into a 27-21 lead at the halfway point.

They would have to foil a French fightback in the closing quarters to eventually hold on to secure a 53-52 win.

In the final tie of the day the defending champions Sweden got the defence of their title off to a winning start as they inflicted a second defeat on Belgium.

Despite the Belgian side remaining in contention, as they trailed only by 28-24 at half-time, they were unable to edge themselves ahead of the defending champions, who eventually recorded a 54-48 win.