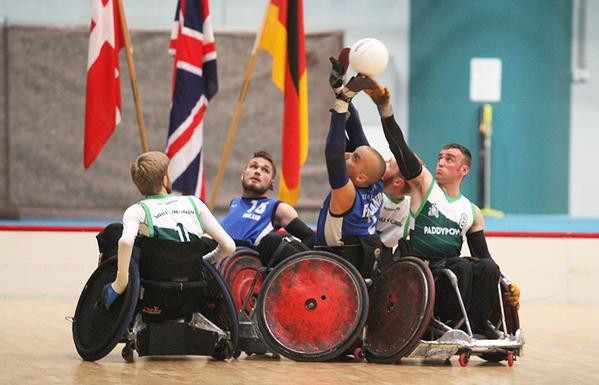 Hosts Finland were surprisingly beaten after a thrilling contest against Ireland on the opening day of the European Wheelchair Rugby Championships at the Pajulahti Sports Institute in Nastola.

Although ranked fifth heading into the eight-team tournament, Finland were expected to have enough to beat the Irish team in front of a home crowd, but their improving rivals proved to be a match for them in their opening Group B tie.

There was little to separate the two sides throughout the opening two quarters of the match with Finland edging their way into a 31-27 half-time advantage.

However, the Irish team were able to make up the four point gap between the two teams in the third quarter to leave the match poised at 46-all heading into the closing eight-minutes.

Ireland were then  able to maintain the momentum as the clock ticked down and although Finland battled hard they were unable to prevent falling to a 61-60 defeat.

Their tie had followed immediately on from the official Opening Ceremony of the Championships, which carries the added incentive this year of being a Rio 2016 Paralympic qualifier.

One of the favourites to win the tournament, Denmark, also began their Group campaign on the opening day of action as they faced Germany.

The Danish team took the lead in the first quarter of the match and stretched their advantage to 29-23 by half-time.

They never looked in danger of relinquishing their lead throughout the final two quarters and wrapped up a 56-48 win.