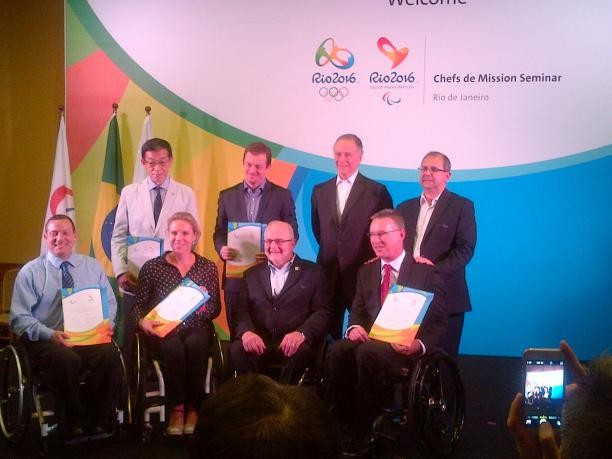 Five countries have been officially invited to next summer's Rio 2016 Paralympic Games at a ceremony in the Brazilian city.

In all, around 170 countries and 4,350 athletes are expected to compete at the Games and it has become traditional for the Paralympic Movement to formally invite five National Committees on behalf of their continent.

International Paralympic Committee (IPC) President Sir Philip Craven performed the duties with just under a year to go before the Opening Ceremony.

Leon Fleiser of South Africa was called to the stage first on behalf of Africa before Kunio Nakamori stepped forward for Asia.

Esther Vergeer, from The Netherlands, accepted the invite on behalf of Europe while New Zealand's Ben Lucas attended for Oceania and Brazil's Andrew Parsons accepted for the Americas.

The ceremony took place following the playing of the Brazilian and Paralympic anthems.

This week, the final Rio 2016 Paralympic Games Chef de Mission seminar is taking place, which will continue through to Friday.

More than 200 delegates from nearly 100 countries are in Rio for the meeting which will see heads of delegations take part in a number of venue tours and receive updates and valuable information on various areas from Rio 2016 and IPC representatives.