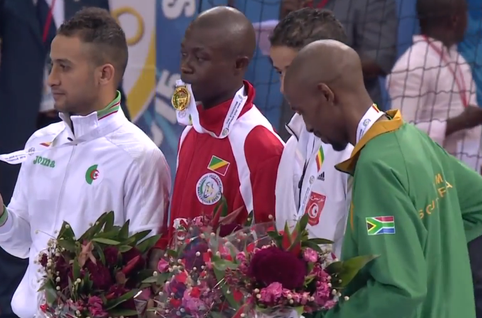 World champion Chad Le Clos romped to a 100 metres butterfly victory today on another day of South African domination in the pool at the All-Africa Games in Brazzaville as karate player Innocent Okemba won a first gold medal for hosts Republic of Congo.

Le Clos, also the reigning Olympic champion over 200m who finished second behind United States legend Michael Phelps over the shorter distance at London 2012, carried the South African flag at the Opening Ceremony and was seen as one of the biggest stars competing at the Games.

He duly fulfilled expectations by cruising to victory in 51.24, much slower than the 50.56 he swam in the World Championship final in Kazan last month but a formidable time nonetheless.

South African swimmers were utterly dominant, as Karin Prinsloo won the women's 200m freestyle ahead of team mate Marlies Ross in 2:00.14, while Tatjana Schoenmaker led home another 1-2 ahead of Kelly Gunnell to win the 200m breaststroke in 2:28.84.

He won in 27.18 to defeat Yossif Elkamash of Egypt.

A rare non-South African success in the pool was claimed by Egypt's Farida Osman who won her second gold of the Games, touching first to win the 50m butterfly in 26.31 to add to her 100m freestyle victory.

Elsewhere at the continental-event, there were three Algerian victories in karate as Hadj Manal Kamila Said, Lydia Besbes and Abdelatif Benkhaled claimed the respective women's kata, women's under 50kg kumite and men's under 67kg kumite titles.

Innocent Okemba claimed the first host nation gold of the Games by defeating another Algerian in Abdelkrim Bouamria in the men's under 60kg event.

There were also three more Egyptian titles in fencing, with victories over Tunisia, Senegal and Algeria in the respective men's foil, men's epee and women's sabre competitions.

There was also a Congolese triumph in men's football as a first-half brace from Kader Bidimbou was enough to secure a 2-1 win over Sudan in Group B, while Burkina Faso edged Zimbabwe 1-0 in Pool A.