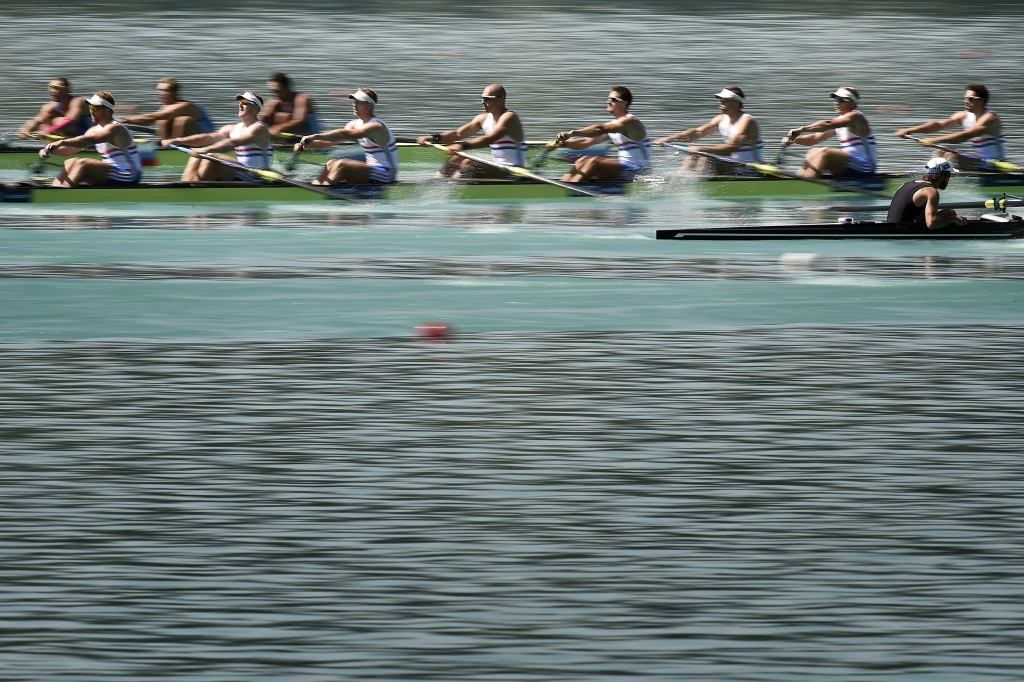 Britain’s flagship men’s eight provided a thunderous finale to the World Rowing Championships on Lake Aiguebelette as it kept Germany’s Olympic champions at bay all the way down the course to earn a third consecutive title by 0.18sec., watched by, among others, the International Olympic Committee (IOC) President Thomas Bach.

After defeat in the European Championships, the British crew - supplemented by the return of Constantine Louloudis at stroke following his absence for exams - has re-established its superiority, albeit by a narrow margin, and today’s race has established a pecking order which Jurgen Grobler’s top crew will strive to maintain in Olympic year.

The victory left Britain top of the medals table here ahead of New Zealand and Germany.

The Netherlands snatched bronze by 0.13sec from a New Zealand crew that won the world under-23 title last year and looked as if it might challenge the big two with 500m remaining.

With five Olympic places on offer, Italy was the unlucky sixth and last crew

“It was the best row we’ve ever had,” said Britain’s Matt Gotrel.

“We had a lot of pressure, but it is the best job I’ve ever had.

“We just executed our race plan.”

Double Olympic champion Pete Reed added: “It’s the first time in a while that I had my doubts before a race..

“The data from the heats showed that it was so, so close.

“ I am speechless. That was tough. It felt like a full-out sprint”.

Germany’s No3 seat Maximilian Reinelt conmented: “We had a good start and a good first thousand,

“At halfway we tried to go, but we were half a length behind and this was too much.

Britain’s medal tally in France was five golds, nine silver, and a bronze compared to four golds, four silvers and two bronzes Amsterdam a year ago.

“The men’s eight winning gold was a great way to finish.

“With our meals, our 12 Olympic slots and four Paralympic slots we can now look forward to stepping on next year to a top performance in Rio at both Games”.

New Zealand’s Zoe Stevenson and Eve McFarlane  defended their title in the women’s double sculls as they came through early leaders Germany in the third 500m and had enough to hold off the fastest qualifiers, Greece, in the final sprint, with the Germans hanging on for bronze ahead of Poland.

Britain’s 39-year-old London 2012 champion Katherine Grainger and new partner Vicky Thornley, racing in the outside lane having got into the final through the repechage, appeared on for a medal after three-quarters of the race, but they fell away to last place in the final sprint - although all finalists had already qualified for Rio 2016.

Standing alongside Grainger’s London 2012 fellow champion Anna Watkins, who has just returned to training after taking two years off and having two children and has been providing comment for BBC2’s TV coverage, Tanner added:

“Our women’s squad is not in as good a shape as we would like it to be.

“The double sculls are not where we want them to be, but Katherine will be better after another winter of training.”

Ondrej Synek of the Czech Republic won a dramatic and fluctuating men’s single sculls final to defend his world title against New Zealand’s Olympic champion Mahe Drysdale by just 0.34sec after regaining a lead in the final three strokes that he had held by almost a boat length at the halfway stage.

“My winter wasn’t 100 per cent as I had a surgery in February,” Synek said.

“I focused everything on the World Championships, and the last training camp changed everything.

“After the semi, I knew I needed to row long to be in front.

“It’s all about next year.”

As expected, the United States women’s eight maintained an unbeaten run that stretches back to 2006,  but behind them New Zealand - with a crew that included the fours gold medallists of last year - took its first senior world medal in this event by overtaking Canada for second place.

Britain, second for much of the race, held fourth place to earn one of the top-five Rio 2016 qualifying positions.

Croatia’s men’s double sculls pairing of Valent and Martin Sinkovic were also expected winners as they defended their title, but – despite a headwind - they were pushed to within three seconds of their World Best Time by the Lithuanian pairing of Rolandas Mascinskas and Saulius Ritter.

“The other crews pushed more this year than last year,” said Valent Sinkovic.

“Next season we will train even more to be ready for the Games.”

Switzerland’s lightweight men’s four were similarly dominant in their final, leading from start to finish to take gold ahead of Denmark and host nation France.