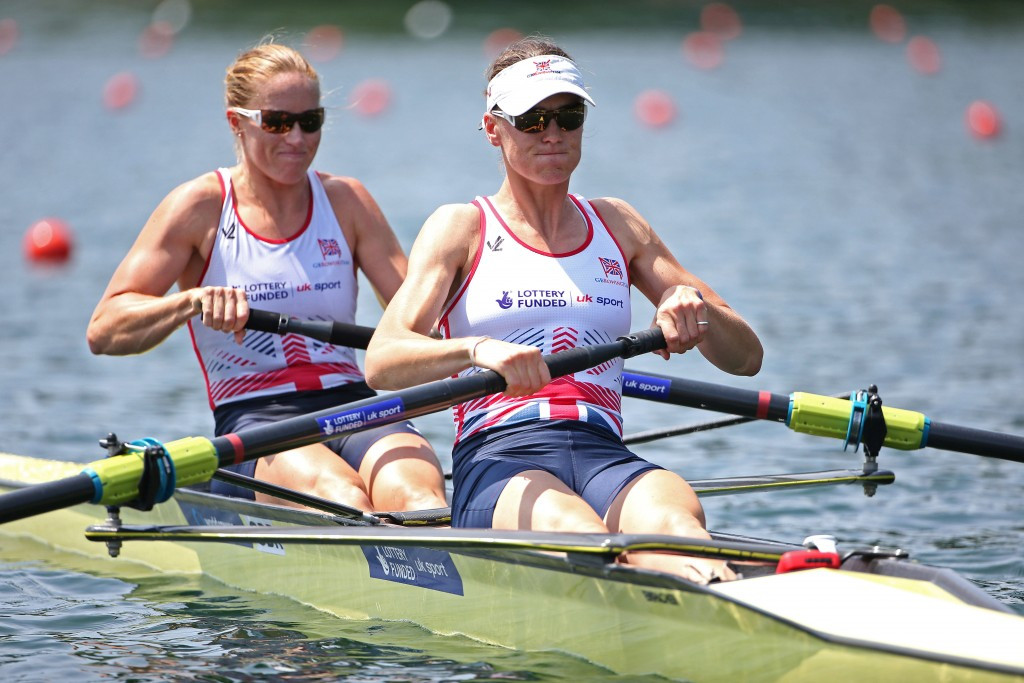 Britain’s London 2012 women’s pair of Helen Glover and Heather Stanning were among those booking their Rio 2016 qualifying positions at the World Rowing Championships today by earning places in the A finals – the bonus ball for all Olympic boat class crews.

Glover and Stanning moved through to Saturday’s final on Lake Aiguebelette in France by winning their semi-final in characteristic fashion.

Leading from the off, they maintained the gap between themselves and New Zealand’s rising force – the world under 23 champions of last year, Grace Prendergast and Kerri Gowler, who finished in second place.

Stanning said: “I am pleased with today’s race, it was the race we expected to have and it’s a nice reward from the semi final to qualify the boat for Rio.

"The next race is the one that counts, it’s the final race of the season, and we’re really looking forward to it."

The US pair of Felice Mueller and Eleanor Logan won their semi-final in the second fastest time of the day.

Martin and Valent Sinkovic of Croatia, world champions and holders of the World Best Time in the Men’s Double Sculls, offered evidence of their ambitions here with a runaway win in their quarter-final.

New Zealanders Eric Murray and Hamish Bond, unbeaten for seven years, sailed through to another world final – and, fates permitting, Olympics – by winning their semi-final in the men’s pairs ahead of Serbia’s Milos Vasic and Nenad Bedik, while their most likely challengers, Britain’s James Foad and Matt Langridge, won the other semi.

And there was further New Zealand success in the Lightweight Women’s Double Sculls, where world champions Sophie Mackenzie and Julia Edward earned a narrow victory over Britain's London 2012 champion Kat Copeland and the new partner with whom she won this year’s European title, Charlotte Taylor. Both boats qualified for Rio 2016 in the process.

Home rowers Stany Delayre and Jeremie Azou, this year’s World Cup winners in the Lightweight Men’s Double Sculls, had the crowd energised as they led their semi-final from start to finish, heading off Italy’s Andrea Micheletti and Pietro Ruta.

Britain’s William Fletcher and Richard Chambers recorded the fastest time of the day in winning the other semi.

Canada managed to secure an Olympic qualifying place as they reached Saturday’s final of the Men’s Four despite breaking an oarlock 50m from home as they chased the newly formed Italian crew.

Britain took advantage to finish second, but the Canadians got home for the third qualifying place.

In the Lightweight Men’s Pair, Britain’s Joel Cassells and Sam Scrimgeour won their semi-final to earn a place in Friday‘s final, where their main rivals look like being the French pair of Austin Mouterde and Theofile Onfrey, who recorded the fastest qualifying time in winning ahead of Germany and the United States.

The level of competitiveness in the Lightweight Men’s Single Sculls was underlined as world champion Marcello Miani failed to qualify in his semi-final as he finished behind winner Rajko Hrvat of Slovenia, Milos Stanojevic of Serbia and Nicholas Trojan of the United States.

The first semi-final had produced one of the most competitive races of the day as Britain’s Jamie Kirkwood earned victory in a race where four boats crossed the line virtually together.

Germany’s Konstantin Steinhuebel and Adam Ling of New Zealand got the other two qualifying spots, separated by just 0.08sec, with Hungary’s Gabor Csepregi just missing out.

Another world champion failed to make it to the A final in the Men’s Quadruple Sculls, where Ukraine finished fourth in their semi behind Lithuania, Australia and Switzerland.