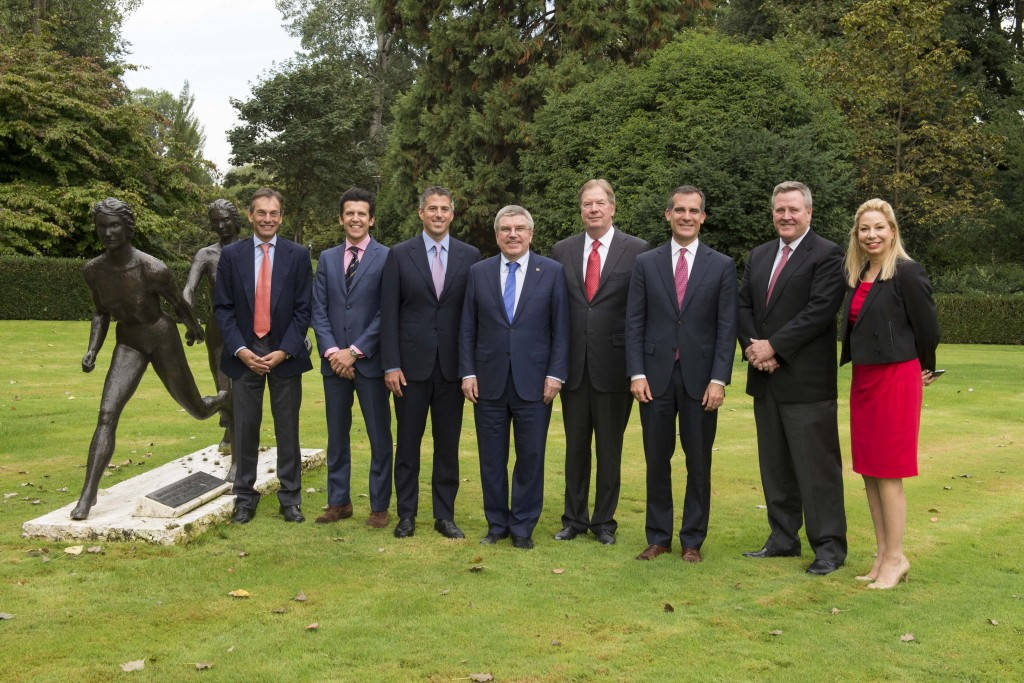 Los Angeles Mayor Eric Garcetti insists he would never do something to endanger the fiscal health of the city having endorsed its bid to host the 2024 Olympic and Paralympic Games earlier this week.

Speaking during a teleconference in Lausanne, where he met with International Olympic Committee (IOC) President Thomas Bach today, Garcetti said he’s already considered how Los Angeles is going provide the necessary financial guarantees to the IOC, something which fellow American cities New York and Chicago struggled to achieve in their efforts to secure the hosting rights to the 2012 and 2016 Games respectively.

The four-strong US delegation flew to Lausanne following the unanimous 15-0 vote by the LA City Council in support of bidding for the 2024 Games.

They met with Bach and members of the IOC administration at IOC headquarters to discuss their initial Games plan and how Los Angeles intends to host the best possible Games for the city, the US and the Olympic Movement worldwide.

"First and foremost my first responsibility is to my city; to its infrastructure, to its fiscal health and I would never do something to endanger that," said Garcetti.

"I think part of the reason that 81 per cent, in the latest poll of Los Angeles citizens, are in favour of the bid for the Olympics is because they understand what the upside of this can be and they also understand that Los Angeles isn’t proposing to build a massive amount of infrastructure because of the Games.

"We’re already doing massive amounts in infrastructure improvement that the Games can benefit from including providing new rail lines, completely transforming the airport and public transportation to the airport, and revitalising Los Angeles River."

Los Angeles 2024’s plan claims to be based on the core principles of the IOC’s Olympic Agenda 2020, the strategic roadmap for the future of the Olympic Movement, with 85 per cent of proposed venues in place or planned and five primary venue clusters all within 30 minutes of the proposed Athletes’ Village.

The Bid Committee also calculates that 80 per cent of the 2024 venues have been built since 1984, the last time Los Angeles hosted the Games.

"I think that maybe distinguishes us from past bids," added Garcetti.

"The remarkable cities of Chicago and New York have certainly been official nominated cities but for Los Angeles, this isn't our first stint, this is something which is in our blood, in our DNA.

"We understand not only how to compete for potentially winning the Olympics, we understand how to run one and I think LA City Government knows how to both have good oversights but also to hand it over to those private sector individuals who run businesses and know how to balance budgets and make sure that we return value."

Los Angeles was confirmed as the US's bid city last month, replacing Boston whose bid collapsed in July when the city's Mayor Marty Walsh said he would refuse to sign the host city contract amid poor public support in the city.

The USOC initially chose Boston ahead of Los Angeles, San Francisco and Washington D.C in January.

Asked what the USOC needs to do to convince IOC members that Los Angeles is the right city to host the 2024 Games having not believed it themselves just eight months ago, Blackmun replied: "LA has such a strong legacy but this is really a kind of new LA.

"At the end of the day, each IOC member is going to have to compare Los Angeles to the other great cities that are throwing their hats in the ring here.

"And I think in time the whole question of Boston will be forgotten.

"We (the USOC) very much look forward to our partnership with LA which is very, very strong.

"Admittedly, this was not a direct route we took to get in here but we could not be more pleased with the level of partnership, level of enthusiasm and the experience.

"It’s wonderful to be in a place where we’re not actually questioning can they do it, we’re asking how are they going to be able to change this? What can they create?

"It’s a very, very exciting possibility for us."

Probst added: "We’re absolutely convinced that Los Angeles can deliver a cost effective Games in line with the IOC pillars of sustainability, legacy and most importantly the athlete experience."

Today’s meeting in Lausanne reflects the newly-created invitation phase ahead of the September 15 deadline for cities to be officially submitted to the IOC.

The IOC will then issue new guidelines to bid cities expected to further bring the bidding process in line with Olympic Agenda 2020.

A final decision on which city will host the 2024 Olympic and Paralympic Games is due to be made at the IOC Session in Lima in 2017, with Budapest, Hamburg, Paris and Rome other confirmed bidders.

Baku and Toronto could also be contenders following their successful hosting of the European Games and Pan American Games respectively.