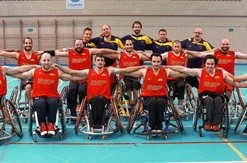 Spain’s men continued their impressive start to the European Wheelchair Basketball Championship, claiming a 61-42 victory over the Czech Republic on an action-packed day at the University of Worcester in Britain.

The Spanish side, bronze medallists at both the 2011 and 2013 Championships, took a 17-10 lead into the second quarter following an even start to the contest.

Clearly eager to stamp their authority in the match, Spain extended their advantage in a fruitful second stanza to ensure they were 36-18 in front at half-time.

From that point on, Czech Republic never really recovered although they did show brief signs of an unlikely comeback in the third quarter.

Spain, however, were able to get over the line thanks largely to Paul Zarzuela’s 10-point haul, earning them their second consecutive Pool A victory.

Turkey, silver medallists at the 2013 tournament in Frankfurt, also picked up another win as they beat Sweden 59-48 in a closely-fought match-up.

Elsewhere, hosts Britain bounced back from their opening loss at the hands of Poland, cruising to a comfortable 80-46 success against France in front of a packed home crowd in Pool B.

Britain set the tone from the outset as they raced into a 10-0 lead, prompting the French to call a time-out in order to regroup and stop the match getting away from them early on.

The defending champions were 22-10 ahead at the conclusion of the opening period, and that advantage became 46-21 at the break as the home side kept up the pressure.

Led by a haul of 15 points from Abdi Jama, Britain never relented and went into the final 10-minute period 37 points to the good before they saw out a commanding triumph.

Italy and Switzerland both came nto their Pool B clash desperate to get a win on the board and it was the Italians who were able to secure victory by a comfortable 79-41 margin.

In the women’s competition, Germany clinched their third success of the round-robin tournament as Marina Mohnen’s 22-point haul inspired them to a 68-34 mauling of Spain.

France were also in good form today as they beat Turkey 70-30.

As well as competing for the right to be crowned European champions, the teams are also vying for crucial Rio 2016 places,

The countires who finish in the top four of the women’s competition and the top five men’s teams will  seal their ticket to next year’s Paralympic Games.