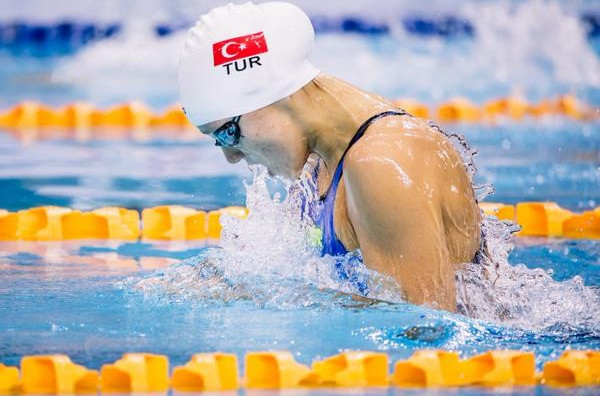 Turkish star Viktoria Gunes rounded off her International Swimming Federation (FINA) World Junior Championships campaign in Singapore on the final day in style, clocking a women’s 200 metres breaststroke time that would have seen her claim gold at the senior World Championships in Kazan.

Gunes, who used to represent Ukraine, powered to her fourth title of the meeting with a world junior record time of 2min 19.64sec, finishing ahead of Russia's Mariia Astashkina and Sofia Andreeva.

Her stunning performance was nearly two seconds quicker than the 2:21.15 registered by Japan’s Kanako Watanabe at the recent FINA World Championships and was only 0.53 seconds adrift of the world record.

“It cannot be mine…it must be great what my parents feel now in Turkey.

“My mum is crying, for sure.

On a busy final day, the Russians dominated the 4x100m medley relays, recording world junior record times in both men's and women's races to bring their campaign to a superb conclusion.

Kameneva also sealed gold in the women’s 50m freestyle, recording a time of 25.12, narrowly ahead of Japan’s Rikako Ikee and Australia's Shayna Jack.

Canada’s Taylor Ruck ensured she topped the individual standings, bagging her sixth medal by clinching gold in the 200m freestyle to complete the 100m and 200m double.

Ruck powered to the crown in a Championship record 1:57.87, beating Russia’s Arina Openysheva and Hannah Cox of the US.

Ikee topped the podium in the women’s 100m butterfly, breaking the Championship record as her time of 58.28 saw her beat Canadian Penny Oleksiak, with Australia’s Gemma Cooney coming through to take third.

The result crowned Ikee the women’s sprint queen as she had already won the 50m butterfly going into the final day.

There was more success for her country as compatriot Nao Horomura denied Pakhomov in the men’s 200m butterfly in 1:56.80, 0.13 seconds ahead of the Russian.

Spain’s Hugo Gonzalez handed his country their first gold of the event with victory in the 200m backstroke in what proved to be a thrilling race as he finished in 1:58.11, 0.28 seconds ahead of American Michael Taylor.

Austin Katz added another medal to the US total, finishing third.

Lithuania also recorded their maiden triumph thanks to Andrius Sidlauskas, who produced an excellent display to edge perhaps the closest race of the final day, clocking 27.99 in the 50m breaststroke.

That proved enough to hand him the title by a narrow 0.04 second margin as Italy's Nicolo Martinenghi was second and Croatia’s Nikola Obrovac did enough for bronze.

Brazil’s Brandonn Almeida bounced back from his defeat in the 400m individual medley, taking the 1500m in 15:15.88, finishing in front of American Taylor Abbott and Spain’s Cesar Catro respectively.