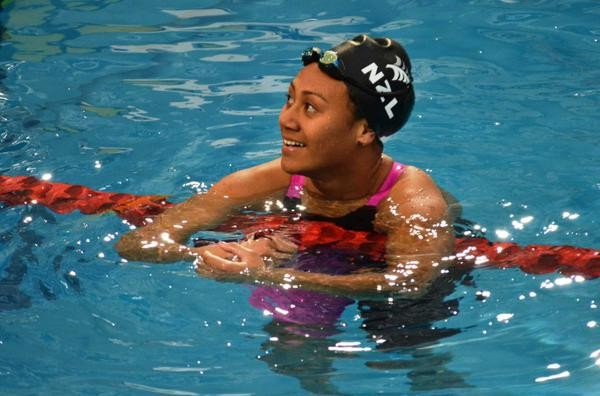 Canada’s Danielle Hanus came through to take bronze but the day belonged to the New Zealander, who produced a superb performance to seal a deserved win.

“To see my name on the board with the number 1, it’s just crazy and I’m just super happy now,” Fa’Amausili said.

“I’ve never raced with Minna at international meets until now so it was great to see her here.

“When I saw her setting a new junior world record in the semis I was a bit scared, but I came out tonight, not thinking of anything else, just tried to swim as fast as I could.”

The second and final world junior record to fall on day five came thanks to Australia’s women’s 4x100m relay team, who posted a time of 3min 39.87sec to edge Russia, leaders for large parts of the race.

The team of Shayna Jack, Gemma Cooney, Lucy Elizabeth McJannett and Atherton were able to catch the Russians towards the end of the last leg to maintain their country's superb display at the event so far, with Canada earning another bronze.

Italy’s Simona Quadarella surged to a commanding win in the women’s 1500m freestyle, smashing the Championship record by clocking 16:05.61, handing her country their first title of the event.

Sierra Schmidt of America had to settle for silver once again, finishing seven second adrift of the winner, while compatriot Gabriekke Kopenski was third.

Another country to secure their maiden 2015 World Junior Championships crown was Ukraine as Andrii Khloptsov won the men’s 50 metres butterfly in 23.64, 0.20 seconds in front of American Michael Andrew.

Russian Daniil Pakhomov touched the wall in third to take the bronze.

Sean Grieshop of the United States was the victor in the men’s 400m individual medley as he was neck and neck Brazil’s Brandonn Almeida before racing clear in the final 50m to clinch gold, clocking 4:15.67.

Almeida did enough to hang on to silver, with Spain’s Hugo Gonzalez sealing the last podium place with bronze.