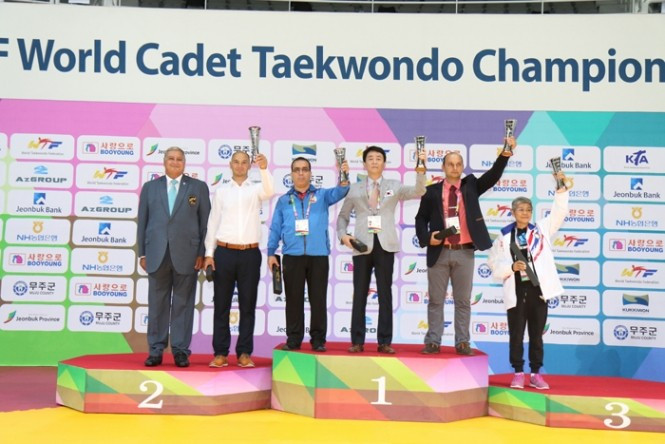 Gi-yeong Lee defeated Vietnam's Dang Quang Pham 21-5 in the men’s under 49 kilograms final with a 12-point gap victory at the end of the second round, while fellow South Korean Chang-geun Kim came from behind to outpoint Iran’s Erfan Moradi 9-8 in the men’s under 57kg showdown.

South Korea won a total of three gold medals, one silver and one bronze to take top honours in the men’s division with a score of 63 points.

The under 49kg bronze medals went to Ukraine's Artur Kulida and Spain's Jose Bellido Martin, while Turkey's Taner Bas and Mexico's Luis Osorio shared the third step of the podium in the under 57kg category.

There was also a gold medal for Ukraine's Vladyslav Yerko in the men's under 61kg category, defeating Russia's Mikhail Sokolov in the final, with the bronze medals going to Kazakhstan's Yelaman Baltabayev and Thailand's Nuchit Rakyart.

Germany came fourth with two golds and one bronze for 38 points, four more than Thailand with one gold, one silver and one bronze.

As for the women’s division, Mobina Nejad Katesari rounded off a dominant performance from defending champions Iran by brushing aside the United States’ Kiana Chai Chong to win the under 37kg final, 5-4.

Victory saw Iran retain their overall women’s title with five gold medals, one silver and one bronze for a total of 83 points.

In the women’s over 59kg category, the US's Melanie Diaz crushed her opponent Aysheh Alsedah of Jordan 16-4 in the final with a 12-point gap victory at the end of the second round, while the bronzes went to Egypt's Nada Elashkar and Russia's Kristina Adebaio.

South Korea came fourth with one gold and one bronze for 36 points, three more than Turkey with one silver and three bronzes.

The four-day World Cadet Championships drew a total of 465 athletes, aged between 12 and 14, from 59 countries.

A KP&P protector and scoring system (PSS) and an instant video replay were adopted at the event, while electronic head gear with visors was used for the safety of the young participants.