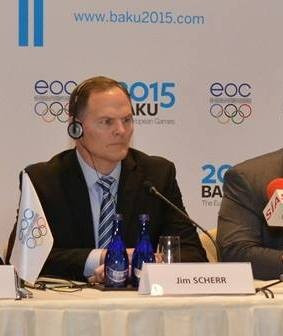 Scherr, a former Olympic wrestler who competed for the US at Seoul 1988, has taken over immediately and will focus on sponsorship, fundraising and raising the brand and profile of the NWBA.

"On behalf of our Board, I am pleased to welcome Jim Scherr as the Association's interim executive director," said Sarah Castle, President of the NWBA Board of Directors.

"He brings to the role, among other assets, an extensive knowledge of the Olympic and Paralympic Movement as well as a demonstrated ability to successfully manage sport organisations.

"We believe he is equipped to assist us to take the National Wheelchair Basketball Association to the next level."

It is Scherr's first role since he left in April 2014 as chief operating officer of the inaugural European Games in Baku.

He had been chief executive at the USOC for nine years between 2000 and 2009 and, before that, was executive director of USA Wrestling for 10 years.

"I am honoured by this appointment and excited about the opportunity to help lead the NWBA forward in the next steps of its evolution as an organisation," said Scherr.

"The NWBA has experienced great success on the court and I am confident that we can build upon that success in the future.

"The sport has passionate and dedicated athletes, followers, and supporters.

"I look forward to working with the athletes and constituents to bring the organisation and athletes to new heights in the future."