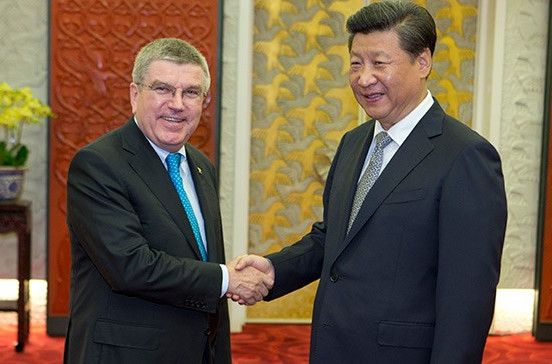 Chinese President Xi Jinping has claimed his country will “deliver on all its promises” ahead of Beijing 2022 during a meeting with International Olympic Committee (IOC) counterpart Thomas Bach in the Chinese capital.

The meeting came less than a month since Beijing was narrowly awarded the Games by just four votes over Kazakhstan rival Almaty during the 128th IOC Session in Kuala Lumpur.

Xi not present in the Malaysian capital but appeared in a pre-recorded video message during Beijing's presentation.

Xi, who met the German during the International Association of Athletics Federations World Championships in the Bird's Nest Stadium - the proposed Opening Ceremony venue in 2022 - claimed the Olympic and Paralympic Games will "contribute to the social and economic development of China and its people".

A commitment to inspire 300 million new people to take up winter sport was a key pledge during the bidding process.

It will "promote snow and ice sports not just to China’s 1.3 billion people but to the whole world,” Xi promised Bach.

He added it will also improve health and lifestyles, "especially amongst young people".

In return, Bach congratulated Xi for the Chinese success, claiming the "Olympic Winter Games Beijing 2022 are a great opportunity for Beijing, the region and for China".

He thanked him for his help in including sport on the political declaration of the United Nations Sustainable Development Goals.

The pair also agreed on the need for international help when organising the Games, particularly in the snow events in which China has less organisational experience.

Bach also expressed the sympathy of the entire Olympic Movement for all those affected by the recent disaster in the Chinese port city of Tianjin, where a series of explosions at a container storage station earlier this month killed over a hundred and injured hundreds others.

The gesture was welcomed by the Chinese President, who talked of the blast and the heroism of firefighters who had “tackled the explosion with no thought for their own safety".

Li told Bach they are already in the process of putting together their Winter Olympic and Paralympic Organising Committee, something they hope will be “economical and sustainable".

"We will not let you down," he added.