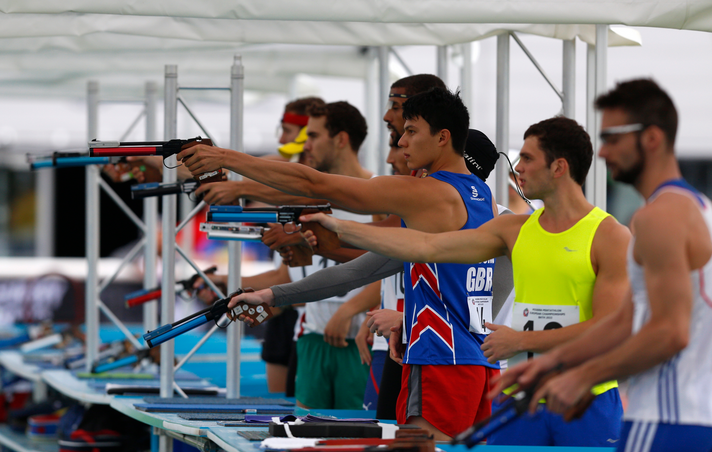 Hungary’s Adam Marosi and Lithuania’s Justinas Kinderis secured their place in the men’s final at the Modern Pentathlon European Championships after winning their respective qualification groups at the University of Bath.

Marosi followed up exceptional shooting with the fourth best swim in Group A, and ultimately finished ahead of Bulgaria’s Dimitar Krastanov, who charged through the field from 17th, and Russia’s Maksim Kustov in second and third respectively.

The Hungarian, who has won the World Championship, World Cup Final and Olympic bronze on previous visits to Britain, was particularly pleased with his result considering he was suffering from illness prior to the Championships.

"The most important thing was to qualify for Saturday's finals - I just did my job in the combined and everywhere." said Kinderis.

"I think it will be very tough this weekend - the semi-final is one thing and the final is another.

"I hope you can congratulate me on Saturday."

The day started with Group A fencing as Greece’s Alexandros Pantazidis came out on top with 20 wins and just 10 defeats, while Tom Toolis' 18 wins made him the highest-ranked home athlete in fifth with fellow Briton Nick Woodbridge in ninth.

While Pantazidis ultimately had to settle for 23rd place, Toolis set a season’s best in the pool with a time of 2:02.58 on his way to qualifying in sixth place.

Despite Woodbridge storming to victory in the pool with a time 1:58.95 and starting the combined event in second, 11 seconds behind Kustov, he ended up in 26th spot.

Group B began in the pool with two Britons, Cooke and Joe Choong, the only swimmers to go under two minutes, clocking 1:56.28 and 1:57.77 respectively.

Some excellent hits from Kinderis saw him take control of the top rank for an extended number of rounds, but it was Latvia’s Deniss Cerkovskis and Russia’s Aleksander Lesun who finished joint first by winning an impressive 22 bouts each.

Lesun started the combined event just two seconds behind overall leader Cooke, who despite being briefly overtaken by the Russian held the lead going into the final stretch where he narrowly lost out to Kinderis.

A total of 36 athletes qualified for the final on Saturday (August 22).

Tomorrow’s action at the University of Bath sees the women’s qualification take place with reigning world champion Lena Schoneborn of Germany and Olympic champion Laura Asadauskaite of Lithuania among those competing.