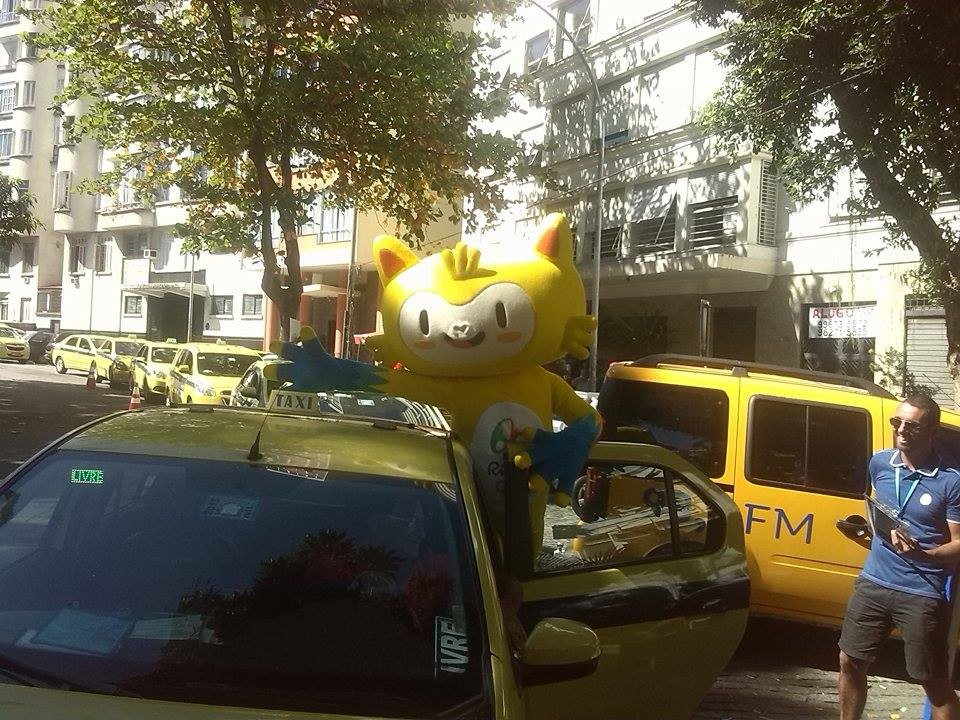 Rio 2016 mascot Vinicius was on hand to try to inspire local taxi drivers to register for an online English-language course, a key legacy commitment of the Olympic Games and a scheme designed to make things easier for visitors when the Olympics and Paralympics open in a year's time.

A total of 10,000 subscriptions are being offered to drivers across the city as part of Rio 2016's partnership with language supplier Education First, with sign-ups taking place this week both here close to the Guanabara Bay sailing venue and at the Madureira Park to the north-west, one of the Games-time live sites.

Open to all levels of ability, the courses are designed to run for four months and to assist drivers in communication with visitors during the Games, as well as in their day-to-day ferrying of foreign tourists.

With 30,000 registered taxis in Rio, the project should help a third of the citywide fleet, with the opportunity to extend that number if there is enough demand.

Taxi-drivers signing-up for the scheme admitted it was often difficult to communicate with non-Portugease speakers.

“We’ve had a good response from the taxi drivers and we know they are sharing the news on their WhatsApp groups and hearing about it on the radio,” said Rio 2016 head of engagement Mariana Behr.

“This will leave a legacy to the city of taxi drivers being able to communicate better with their passengers and offering a better level of service.

“When tourists arrive in Rio, taxi drivers are often the first local people to greet them.

“They can provide up to date information and share tips and advice.

"One year from now, our taxi drivers will host people from all corners of the world who come to Rio for the Games, and we want to help improve this dialogue.”

The scheme, which could be expanded into cities hosting football matches during the Games, forms part of Education First's commitment to roll-out training to one million Brazilians.

Those from lower-income groups who are unlikely to be able to afford such courses independently are being targeted, Behr revealed.

The launch of the scheme comes shortly after Rio 2016 unveiled more information about their broader legacy programme associated with the Games, which they claim goes beyond their initial promises when successfully bidding against Chicago, Madrid and Tokyo in 2009.

One of the highlights is the transformation of the Carioca Arena 3 - the Barra Olympic Park venue which will host taekwondo, fencing and Paralympic judo next year - into an "Olympic Experimental" School for 850 students, sharing full-time elementary education with 10 sports disciplines.

As well as the physical legacy envisaged through the new venues and associated infrastructure projects, another key dimension is the "Transforma" education programme, which is now being expanded around and beyond the host country following an online launch.

There has been criticism, however, of a failure to meet some objectives, particularly the commitment to reduce pollution levels across the city by 80 per cent, with officials claiming they have improved it by 50 per cent while others maintain there has been little or no progress.