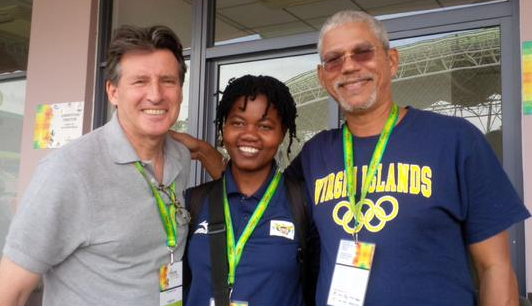 Russia and the United States have signaled they are backing Sebastian Coe in his campaign to become the new President of the International Association of Athletics Federations (IAAF) by being among a group of countries prepared to waive or reinvest their entitlement of the Olympic Athletics Dividend he proposes to introduce if elected.

France and Qatar have also announced they are backing the scheme - indicating that they also plan to vote for Coe at the election due to be held as part of the IAAF Congress in Beijing on August 19 - along with Canada and Great Britain, who have already publicly declared they are backing the double Olympic 1500 metres gold medallist.

Coe announced last month that the Dividend, which is in addition to all existing IAAF grants, would be distributed among all 214 Member Federations if he is elected to succeed Senegal's Lamine Diack, who is stepping down after 16 years as head of athletics world governing body.

Totalling $22million (£14 million/€20 million) over a four-year cycle, the Dividend would be funded through approximately half of the quadrennial fee received from the International Olympic Committee (IOC) and payments would be made directly by the IAAF to its Member Federations.

More money will be available, potentially, to distribute to smaller Member Federations after several bigger and richer countries promised they would not take up their allowances.

“Following conversations with IAAF Member Federations, I am delighted that a number of them have already agreed to waive or invest the Olympic Athletics Dividend that they would have received if I am elected IAAF President," said Coe, currently in Costa Rica's capital San Jose for the North American, Central American and Caribbean Athletic Association (NACAC) Championships, which started today.

"This agreement was reached as part of their commitment to provide additional financial support to those countries most in need of funds.

"I’d like to offer my sincere thanks to these Federations for this generous gesture of solidarity and for their commitment to growing athletics globally.”

“This is a great example of how we can work together as the athletics family to invest in opportunities that fit with Member Federations’ specific priorities.

"It is important that revenues are distributed fairly and equally and by working collaboratively with Federations we can also ensure that those most in need have some additional financial support.”

The backing from Russia and the US is particularly significant because they are the two most successful countries in the sport and it is unlikely they would be willing to be so closely associated with Coe's Olympic Athletics Dividend unless they planned to vote for him.

“The Olympic Athletics Dividend is a great way to bolster our Member Federations’ ability to nurture and grow athletics, which is why we support this initiative and will share ours for the benefit of others within the athletics family," Stephanie Hightower, President of USA Track & Field (USATF), said.

USATF, however, warned they will not publicly endorse Coe or his rival, the former pole vault world record holder Sergey Bubka, "prior to voting” at the Congress “in order to respect the IAAF election process".

The Swedish Athletics Federation (SF) have, though, confirmed insidethegames' story last night they plan to vote for Coe in the election.

"Both [Coe and Bubka] are very deserving people and I will add the Swedish voice of Sebastian Coe," said Björn Eriksson, President of SF.

"He stands for an interesting innovation in international athletics as he has a proven administrative skill, not least when he was in charge of the London [20120] Olympics."

Coe now has the public backing of 21 countries, while none have so far come out in support of Bubka.