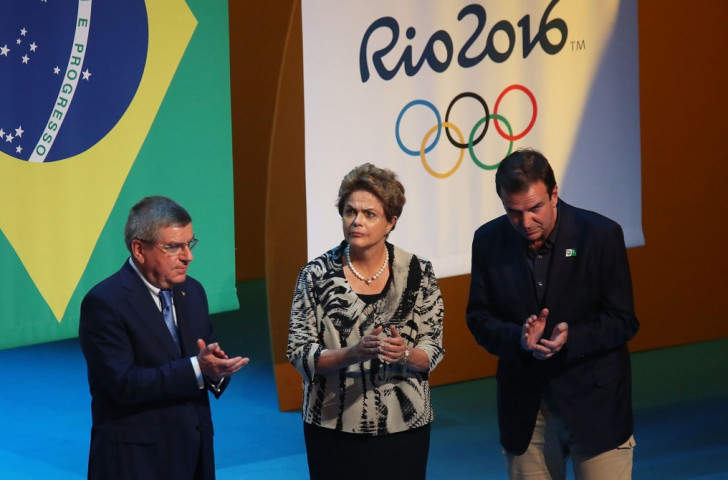 A musical homage to Brazilian culture formed the finale of a ceremony tonight attended by Brazilian President Dilma Rousseff and International Olympic Committee (IOC) counterpart Thomas Bach marking exactly one year until the Opening Ceremony of the Rio 2016 Olympic Games.

The duo joined with the likes of Rio 2016 chief Carlos Nuzman, Rio Mayor Eduardo Paes and Brazilian Sports Minister George Hilton along with a host of sporting officials and athletes for a ceremony highlighted by the launch of the official invitations to be sent to all 206 National Olympic Committees set to compete in a year's time.

Speaking first in one of several recent appearences connected to the Games, Rousseff explained how the country is "working hard to achieve the best party that the sports world has ever lived".

She highlighted the "strong culture of peace and work" of the Brazilian people and claimed Rio will produce the "most beautiful setting for an Olympic Games" since the time of Ancient Greece.

Bach then followed by praising the legacy and predicting how next year will be "Brazil's moment", where the world will be "enchanted by the warmth of the Brazilian people, the vibrant and diverse culture".

The German then handed invitations to six NOC representativees, including Brazilian Olympic Committee head Nuzman and Spyros Capralos, Alexander Zhukov and Tsunekazu Takeda, the respective heads of the Hellenic, Russian and Japanese Olympic Committees,  all of whom gave a short speech afterwards.

This took audience members on a "musical journey into the heart of samba", it was claimed, and a taste of the atmosphere that can be expected in one year’s time.

The only salutory note on proceedings was a small protest by about 15 people criticising the removal of families living close to the Olympic Park and the pollution of Guanabara Bay.

But after the international focus on challenge ahead of the Games in recent months, tonight was a reminder of what there is to look forward to.

Along with a number of other events designed to coincide with the milestone, including the World Junior Rowing Championships which began today on the Lagoa Rodrigo de Freitas, a series of special messages by many of the world's leading athletes have been released to further build excitement.

“One year from now I plan to come to Rio and make history," Bolt said.

"I am working hard every day to make it a ‘triple triple’ in Rio next year.

"Rio is a beautiful city and I look forward to seeing you there in August 2016.”