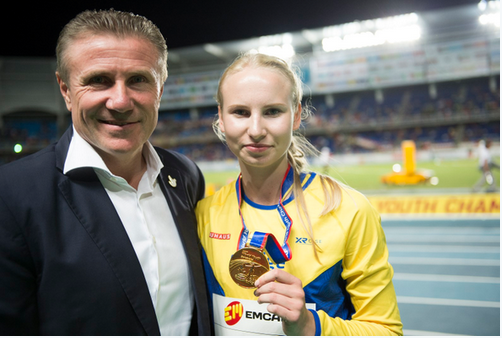 Sergey Bubka today joined his rival to become the new President of the International Association of Athletics Federations, Sebastian Coe, in defending the sport's record on doping.

Bubka, unlike Coe, stopped short of condemning British newspaper the Sunday Times and German broadcaster ARD, whose report athletics had turned a blind eye to hundreds of suspicious blood tests, is now threatening to become the dominant issue in the build-up to the election to replace Lamine Diack at the IAAF Congress in Beijing on August 19.

“Athletics is the most fundamental of all sports and the way the world sees athletics influences the way it views all sports," Bubka, the 1988 Olympic pole vault champion, said.

"We cannot fail because the world would lose faith not only in athletics but in other sports and that would be a catastrophe for young people worldwide.

“We must be more proactive and even more transparent in our aggressive pursuit of a zero tolerance policy against doping cheats.

“That means working even more closely with WADA (World Anti-Doping Agency), the IOC (International Olympic Committee), National Federations, National Doping Agencies and Government bodies to ensure the process by which cheats are identified and prosecuted is truly independent.

"We need to support WADA and constantly drive it to ensure that together we have the latest technology and most advanced science at our disposal.

"This is a battle we can’t afford to lose, for the sake of athletics and all sports.

“We need to work even more diligently and effectively and in a coordinated fashion with established bodies to find the best solutions to ensure the detection and punishment of cheats at every level of our sport and in every part of the world.

"It is clear that we need more people working at the IAAF to tackle the biggest challenge our sport faces - identifying doping cheats and protecting clean athletes.

“At present the anti-doping system is too complex and takes too long.

"It needs to be simplified to become faster and more efficient and we need to deploy the best research and science to ensure that we keep a step ahead of the dopers.

“We must work with bodies who share our interest in ensuring clean sport to contribute to funding the personnel, expertise and technology which will help us win this battle.”

Bubka's response came as Athletics Papua New Guinea became the 20th country to reveal publicly that they are backing Coe in the election to find a successor to Senegal's Lamine Diack, who is stepping down after 16 years in the position.

"The sport of athletics faces some very serious challenges and what we have seen from Sebastian not only in the organisation and delivery of the London Olympics but in his role as vice-president of the IAAF the presentation to the 2011 Congress on preparations for London 2012 which captivated his audience and ended with a standing ovation," Athletics Papua New Guinea President Tony Green wrote in an email sent to more than 70 countries who are members of the IAAF.

"Cometh the hour, cometh the man.

"Sebastian is the man."

The IAAF had labelled the Sunday Times and ARD allegations "sensationalist and confusing" in a statement yesterday and Coe called them "declaration of war".

Britain's double Olympic 1500 metres champion, vice-president of the IAAF, added: "I don't think anybody should underestimate the anger that is felt in our sport.

"We have led the way on this.

"To suggest that in some way we sit on our hands at best, and at worst are complicit in a cover-up, is not borne out by anything we have done in the last 15 years.

"As a sport we have led the way on out-of-competition testing, on accredited laboratories, we were the first sport to have arbitration panels.

"Yes, we have countries out there that are causing a problem and an inordinate amount of difficulty across our sport but to say we are not investigating or turning a blind eye to this could not be further from the truth."